I realize there has been a looonnnng delay since my last post. Can I claim that I was resting on my laurels? 🙂 The truth is that sometimes, no matter how strong the siren call of SL, FL is first. And that’s what this week of silence means. So I want applause for my sense of responsibility, keeping my priorities straight and all those other things some of you think I need to remember. 🙂 And when I tell you I went on a mega-shopping spree on Saturday to get ready for Shenlei’s Rave Saturday night, I don’t want to hear about it! I spent mega-hours and mega-L$. I had a blast!!!!

Clueless. Whatever did we all do before Google??? According to Wikipedia “Steampunk is a subgenre of fantasy and speculative fiction that came into prominence in the 1980s and early 1990s. ” Okay. So what is steam punk fashion??? Googled that as well. According to the NY Times Steam punk fashion is “an adventurous pastiche of neo-Victorian, Edwardian and military style accented with sometimes crudely mechanized accouterments like brass goggles and wings made from pulleys, harnesses and clockwork pendants, to say nothing of the odd ray gun dangling at the hip”. Hmmm. I started searching inworld on Steam punk. I really wasn’t having much success. I found one possibility, but it didn’t really thrill me. I tp’d from place to place, store to store. Met hardly a soul and found almost nothing worth marking. I was beginning to think I’d have to go back and settle for the red outfit that didn’t thrill me.

Bona Fortuna smiled on me. Shenlei logged in. I IM’d her and told her I was looking forward to her party but had NOTHING to wear! She sent me some LMs and told me about SLexchange. 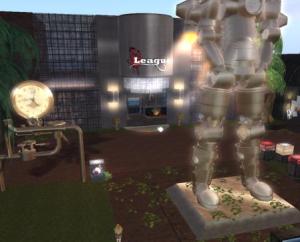 SLexchange.com is a site where you can search for SL items without being inworld. I followed her LM to Steam Forge inworld, to the store Legacy. Check out the landscaping – gets you into that Steam Punk mood, does it not? I immediately found an outfit I liked (I had help from my significant other picking out the outfit – thanks Hon!). But it was only a top and a skirt. I still needed boots and accessories. I was searching away on SLexchange for Steam Punk. I found belts and boots and wings and all sorts of fascinating things, many of which were on sale in Steam Powered Nuts, a store in Steam Forge. So I wandered over to SPN and browsed about. What cool stuff!!!! I did see an intriguing ray gun or two. 🙂 But I really didn’t see boots that fit my mood.

So I tried to buy boots through SLex. Do you remember one of my very first posts when I began this adventure? My coworkers who had done SL kept

telling me “it’s easy”. NOTHING about SL is easy. Have I made that clear?? LOL. Perhaps it’s me, but nothing nothing nothing in SL is easy. 🙂 And nothing related to SL is easy. I had to register and enroll and activate an SLex account in order to be allowed to contact the boot vendor. This meant that I had to give email information and get an activation code and go inworld and find an SLex terminal. What a colossal nuisance!!!!! So I did all of that and located a terminal and tp’d there to activate my account. 🙂 And who should be sitting outside the building with the SLex terminal but Shen!!!! LOL. I explained my problems with trying to buy boots and yet again Shen rode to my rescue!!! So thanks to Shenlei I have the coolest boots!!! I got confirmation later that day that these boots were indeed cool. C, one of the NCI team, always has fantastic boots and jackets and accessories. I love how she looks. So when C complimented my boots and asked for the LM, I was quite pleased to share it with her.

I had my outfit, I had my boots, I knew where I was heading for a choker. I decided that I needed new hair as well. Checked the bank balance – yep, still had something left to buy hair. 🙂 Now here is where I broke from the steam punk genre. My every-day hair was probably better suited to steampunk than what I bought. But I couldn’t help myself. LOL. Have you noticed I have very little self-control when it comes to indulging myself in SL??? Following more of Shenlei’s tips I headed to Analog Dog. Guess what – it WASN’T easy!!!!! 🙂 I’d gone skin shopping a few weeks ago with I so I knew about demo’s. I’d totally forgotten how one buys an object that also has a demo for sale. The demo is hilarious. I bought the demo hair, wore it just as you would anything. But there is this big huge wavy box above your head shrieking DEMO to the world! With the skins – the word “demo” is plastered all over. No shoplifting allowed in SL! 🙂 I IM’d 2 women standing in the store and asked for help. One of them kept asking to bite me (yes, sigh, another vampire) but helped me inbetween bite requests. The other helped without asking to bite me. 🙂 I finally figured out from their comments and my memory that I needed to click on the color palette for the hair, not the picture of the hair. The hair comes in 3 different palettes. So I selected one, handed over mega L$ and now I have really fun hair for special occasions!

Boots, clothes, hair. Accessories!!!!! I fell in love with a treasure hunter’s belt. 🙂 How could I not?? A sextant, a periscope, a flintlock pistol and a little mouse in a red pouch! Who could resist that purchase? Certainly not I. Fell in love with a collar that had lots of gadgets attached also. Interestingly enough, neither was at Steam Powered Nuts or Steam Forge. They were both in a fun store, an old junk factory, on Le Petit Prince (/LPP/223/69/31 for anyone who may be interested).

Now I had it all! TP’d back to NCI where my friends were all having a fishing contest and showed off the outfit. They gave the NCI seal of approval. 🙂 I was all set to party! And that, my friends, will be it’s very own blog. Because I have NEVER been to such a wild and stimulating party!! I never knew I could dance like THAT!!!