Bea and I were talking about sex. I know. How unusual in SL. or RL. 🙂 Well, Dale already ruined my surprise – guessed that there is indeed sex in SL. There is lots of it, in fact. And you learn to take it in stride. So I know or have encountered RL men who are SL women, RL “straights” indulging in SL “bent”, herms, TG, TS, Gorean, BDSM (Hey – I don’t post EVERYTHING on this blog, you know??). I don’t think that I’ve encountered RL women who are SL men but then, would I know? And, of course, there are the non-human avatars.

I’m trying to remember if I’ve ever even slow-danced with a furry. 🙂 I know that i’ve gone rock n’ rollin’ with them. But I think I’ve only slow-danced w/ human avs. Obviously I need to remedy that situation. I wouldn’t want to be accused of being narrow-minded. And I can tell you truthfully, straight-out – I’ve NEVER had sex with a furry. 🙂 Which leads me to……

Bea and I were talking about all the different sex/love possiblities inworld. And we stumbled upon an interesting issue. Suppose Bea was a bunny av? 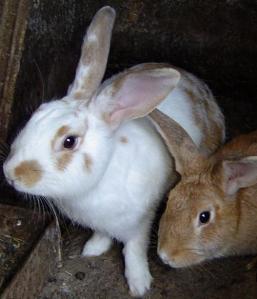 NOT playboy bunny, silly. But a REAL bunny – you know, like Flopsy, Mopsy or Cottontail. If Bea and I were to have sex….. eeewwwww. Somehow that seemed very wrong to both of us. Now it may NOT seem wrong to you. I have no problem with that. Just don’t put on your bunny av and ask ME to, um, yeah, whatever. But what if I were a bunny ALSO??? Would THAT be wrong???? Bea said yes. You know what? I say no. Somehow two bunnies together – that seems like a beautiful thing to me. 🙂

On the other hand…. a bunny and a non-bunny, say a bunny and a dog? Wrong wrong wrong. 🙂 (In case a disclaimer is necessary here: I am being light-hearted and facetious!!!! Do NOT take this too seriously!! )