I’m still too wiped from accumulated lack of sleep last week. After the party and the party after the party and the party that I went to AFTER the party after the party…. well….. I slept for 12 hours. Rolled out of bed finally and into RL where I had a bunch of fun things to do. Didn’t make it back inworld until last night. And was only there maybe an hour! Wow. I bought a new belt. It’s red. 🙂 I like it a lot. Bought it at Bax’s boots. I”m wearing it now. Didn’t you NEED to know that? Then I joined Honour for some blues and dancing at the French Quarter. Von Johin was playing and it was great. Just what I needed to ease back into SL.

So since I’m not doing anything, let me direct you back to Shengri La. I snuck over there last night for a sneak preview on the candy canes (yep, bought candy canes, got some neat jewelry). Undoubtedly there will be another official announcement, but I’m leaking the news here. 🙂 Okay, I’m not really “leaking” it. Shenlei announced all the December happenings already. So get yourself over there for the candy canes! They are stuffed with goodies and cost only L$25 and all of it goes to support CRY America. What kind of goodies? The items include gowns from the old Prim & Proper line, jewelry sets, boots, shoes, handbags and much more.

And go sledding at Aintree Willow.

What else? Feel free to drop by my place and hang out with the ducks. We left the beach towels out for you. 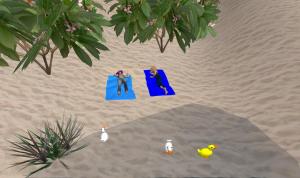