saw their tp system for moving about the house and I NEED one of those for my house. That would be a scripting assignment for me. A friend of mine offered me an underwater cave for terraforming. I need to learn Photoshop so that I can create textures for the hair that I am supposed to be learning to build. No problem. I had all of this vacation time stretching ahead of 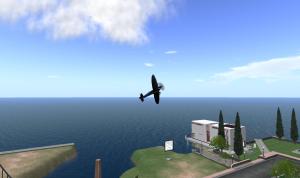 me. Over a week of time when I could script and build and learn and be productive.

So what have I accomplished? I straightened out my inventory and I bought more stuff. What am I doing that I am not accomplishing 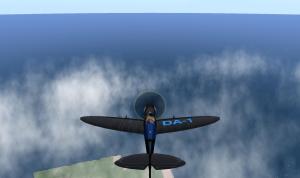 anything productive? I am socializing and playing and shopping. I spent nearly 3 days staking out a lucky chair in order to get a dress. Now mind you – I could have BOUGHT the dress. But I didn’t like it enough to buy it. I wanted to WIN it. There were 5 outfits being given away on 3 chairs. I had 4 of the 5 outfits. I’d been staking out that chair for 2.5 hours

when the “A” finally appeared with the dress. But I was just a tad slow on the clicker (I was deep in a serious IM with a friend) and some $^#Q$$% other Av, who came to wait MUCH later than I had arrived, beat me to it. That is really rude, bad form and down-right inconsiderate. It took me 2 more days to finally bag that dress.

And, as you can see from the pictures, I went flying again with Dark. He’d been tweaking the Spitfire and was going to take it for a test flight. It was my good fortune to be logged in at the time so I got to go along. My son was home and watching over my shoulder as we tp’d to join Dark and hop aboard. We took

off and headed into the wild blue yonder. We buzzed the neighbors and soared into the sky. We turned and dove and climbed. My son really wasn’t too sure that he was enjoying it (too real for him when we started spinning). But I was! We soared past the bridge and the tower and went faster than the land could rez. I don’t remember where or why we flew into a particle stream, but since it was red and green,

I’m sure it had something to do with Santa. We finally hit an area that blew us out of the air and ended our flight. But we had another perfect day for flying – clear skies and good wind.

We ended the day ice skating at Shengri La. Another sublime SL experience, even though we were soaring on earth 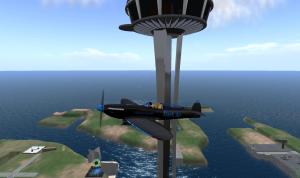 One thought on “Dark Air II”