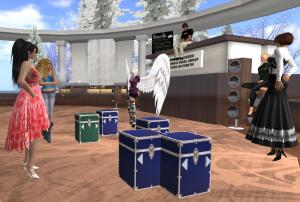 One of my favorite things in SL is hanging about with friends, talking. Maybe you’ve noticed that in this blog? But there’s really nothing like “girl talk”. “Girl talk” can range from the sublime to the ridiculous, from secrets to broadcasting, from the deeply personal to the totally generic. We love to share information and tips. We love to hear how others solve the problems that we encounter. And oh yeah – *I* can use the word “girl”. That’s because I

am one. Female. A Gal. Even, on occasion, a chick. But if you are male – you may NOT use that word unless you are talking about a female under the age of puberty. You’ve been warned.

So Girl Talk (GT) is the best. If you are a guy and you are there when GT gets going – run for cover. Because you are totally out of your league. Ask Alann. He had the misfortune to be present at the Crown and Pearl the other day when GT broke out. You never really get a warning – it just happens. We were hanging about, dancing, chatting. The usual. Rrishanna, Bailey, Marisa, Natalya, Alann and Nicole were hanging about when I tp’d into the CnP, fresh from my adventures in Victoriana. Somehow the talk turned to inventory (perhaps because I mentioned that I’d been checking out Shenlei’s new store). Someone, and I really don’t want to point out the miscreant (BL), actually claimed that one could have too much inventory!!!! HERESY!!!! 🙂 That statement was not unchallenged but we did all agree that managing inventory was time-consuming and even problematic.

Well, problematic for SOME of us. Bailey and Marisa are absolutely terrifying (to me anyway) in their approach to inventory. 🙂 Okay, I admit right up front – I am completely envious of how organized and efficient they are. I want them to come and clean up my inventory for me. I have actually cleaned up my inventory. But it takes only 1 day before it spirals out of control again. But this is NOT about me – 🙂 – this is about Bailey and Marisa. Bailey, who has actually deleted items (I can’t imagine that at all – I’m trying to remember when I last emptied my trash folder), has BOXES of inventory items that she doesn’t want. She has FIVE Don’t Want boxes and a Not Sure Box. She rezzed them out for us. They talk:

Don’t YOU want one too???? Marisa has folders so organized that I’m sure that when she buys something new, it leaps directly into place out of respect and awe. Her clothes folder has sub folders. (okay, so does mine). Her sub folders have sub folders. And so do they. Everything is “sorted by category then color”. I can’t even figure out what half of my clothes items ARE, much less what color they are. Her shoes are organized into flats, heels, sandals, boots (tall and short) and others and then, yes indeedy, subfoldered by color. Bailey countered with how her clothes are in dresses, outfits, club wear, goth and separates and then the separates are by jacket, sweater, tank, jeans, skirts etc. Rrish chimed in saying that she organizes by item: casual / formal / dressy / designer. Natalya and I knew that we were in the presence of greatness. I was humbled and cowed and decided it would be way too much effort to emulate them, so I stood about gazing at them in admiration and uttering words of praise. Nat, who has way more energy than is healthy (for me, anyway), took their genius for inspiration and began reorganizing her own inventory. Alann – well, face it Alann – you were hopelessly out of your element. 🙂 Although you DID get off a few priceless comments. During the shoe-sorting discussion Alann let us know that he sorted his shoes by what he found on their soles. 🙂 Yes – I cleaned that up.

At the point where the conversation turned to organizing notecards and landmarks I confess – I wanted to flee. 🙂 But then we started discussing having a yard sale or giving away our unwanteds to Newbies. And conversation flowed on. But I have the image of those boxes with me forever. Perhaps one day I will be inspired to clean up MY inventory as well.

and hopes and idle thoughts. Issa and I are both fairly busy, so I treasure the times we are actually in the same location, hanging out chatting. There was the day that Issa told me that she and Huk were pregnant. Yes, you can be pregnant in SL. I haven’t made up my mind if I’m going to blog on that or not. 🙂 You’ll be the first to know if I decide that there’s something I want to post. And sometimes we simply whine and complain at each other. Or encourage each other in some endeavor. But it’s good to know that Issa is always there for me. And I’m there for you, Issa, whenever and however you need me.

4 thoughts on “When Girls Talk”