I took the day off today – I had a lot of RL stuff that had nothing to do with work. So when I got home and logged in, somehow it seemed appropriate to go and relax at the Crown and Pearl. I realized I’d not been there for a long time.

When I arrived there were five friends there. I was about to begin dancing when I realized that I was the only one there without a tail. Now I’m not usually one to bow to peer pressure. I have been there before when nearly everyone else was “tailled”. Tonight, however, I noticed the lack and commented on it. Although they assured me that I could stay anyway, Nat did pass me a tail. OMG. It had a notecard with a zillion instructions. Now I know why I don’t wear a tail. Nat laughed at me when I said all that to her and 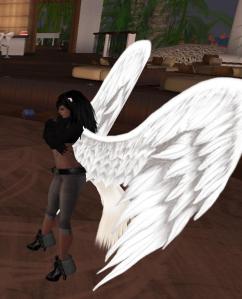 said “Just WEAR it”. LOL. So I did. Hey. It’s kind of cute, you know? I don’t know that it will be my normal attire, but it was fun. So Nat passed me ears as well and PRESTO! a Neko was born. 🙂 You gotta love SL.

We all continued dancing and laughing as more folks arrived. I rather like watching the tail moving about as I dance. I may have to reconsider the whole subject. I”m not as sure about the ears. I think that both of them are scripted. I KNOW I don’t have time to figure out the scripting.

Ah. Speaking of time…. I did it again, folks. I volunteered. Yep. Yet again I volunteered at work for something for which I am probably not suited. I did mention that, somewhat, to the

project leader. But when no one wants a job, even the incompetent are considered. So expect to hear more about the joy of Land Ownership and Land rights. 🙂 Because I have a lot to learn in a very very very short time. At least I know a little bit more about this than I know about those trees. *grin* And THIS time- I have a teacher!!!! HELL!!!!!!! HELP!!!!!