Yesterday and this morning were a great example of the fun you can have in SL. I logged in relatively late last night. I started IM’ing with friends, catching up on their news. Honour was shopping. Oh my yes. Honour. Shopping. I had the correct noun, the correct verb. 🙂 She was supporting the Relay For Life fund raiser that has been going on in SL all week. She described some of the clothing that she was seeing. LOL. We both agreed that it sounded much more like Ahuva clothing than Honour clothing, so I tp’d over to join her. Many of the outfits did indeed appeal, but I realized quickly that I wasn’t really in a spend-money mood. 🙂 So I simply tagged along, checking out outfits.

Honour was searching for the House of RFyre store. VERY nice clothes at RFyre. We were searching about in a fairly unorganized fashion, not having much success. I realized that Oura knows EVERYTHING. 🙂 That if I IM’d Oura, she would undoubtedly know exactly where it was and get us there. I was in luck – Oura was online. She did not know where it was. But being Oura – within 10 minutes she got the information. LOL. She went to the main store, spoke to a designer, who tp’d to the RLF and then sent the taxi for Oura. Who sent for me who sent for Honour. Success!!! And the RLF scored more donations! All in a good cause.

We wanted to thank Oura for all her help. I remembered that we could vote for Oura. *grin*

Hey, you want to know more than that – YOU contact Oura and tell her to tell me to blog about it. So Honour and I headed over to vote. Just then DARCEY logged in!!! YAY!!!! DARCEY is back!!! Darcey is my niece. 🙂 She used to hang out a lot in SL, then took a break. But she came back just this week. So I IM’d Darcey and said “come vote”! And Dale logged in and I IM’d Dale, who came to vote. Sammy and Jonah showed up there too. We were all hanging about and admiring the surroundings and realized that we had an impromptu party going.

So we headed over to Indolence, Dale’s club. We changed into party outfits and sent out more IM’s to folks to join us. 🙂 And they did. We even managed to convince the hard-working Shenlei to stop in for a bit as well. We had fun dancing and chatting. Now there are SOME people who simply have no manners. You might be among the people who say that 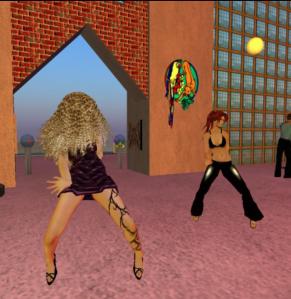 *I* have no manners, because I opted for my tattoo instead of …. well, um….. instead of, shall we say, proper undergarments. Hey folks – it’s pixels!!!! I LIKE my tattoo. I, however, say that the people with no manners are the people who tried to take photos of me for blackmail purposes. I think that is VERY tacky. Thank goodness I had a counter-defense. I maintain my own supply of blackmail photos. 🙂 The best defense is a good offense. It was a short party, but fun.

This morning I logged in early. In one of my groups, someone was offering evil bunny slippers to the first 4 IM’ers. 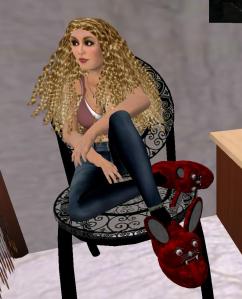 Too funny for words. I really didn’t think I needed evil bunny slippers. But after a few minutes, when the last pair was still available, I took them. 🙂 Not only that – I learned something new. I’m sure you all know this. I learned that if you click on someone’s name in Chat, their profile appears, so that you can IM or give inventory. I never knew that. I learned it because I wanted to send my benefactor a photo of me enjoying my new evil bunny slippers (with vampire teeth, no less).