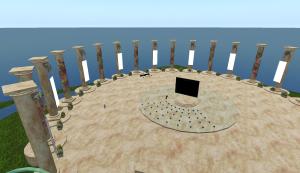 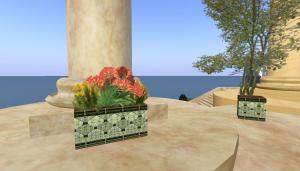 Sigh. I don’t seem to have much luck with gardening for work. J gives with one hand, takes with the other. A few weeks ago I mentioned she gave me a sandbox, flowers, plants, EVERYTHING and told me to go plant. And I did. I will make this painful and sad story very short: J told me she had to take 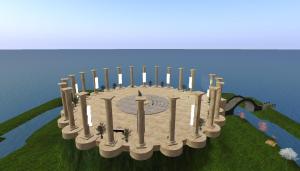 down that sim. In other words – bye, bye garden. LOL. Can you believe it????? Okay, J was totally apologetic and sorry. But still – yet another garden bit the virtual dust. This is a bit better than the first time – at least if she brings back the sim my garden will come back too. 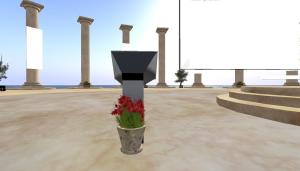 Do you read Charles Schultz’s comic strip “Peanuts”? Do you remember how Lucy will hold the football for Charlie Brown to kick? How she always PROMISES that THIS time she won’t pull the ball away? But she does. Every time. Yet Charlie Brown falls for it everytime. J went and found me a landscaping job in our virtual world. *grin* Yep, she volunteered me out to another group to landscape THEIR sim. Oh my goodness – I fell for it. They said they would love to have me landscape, I was delighted to have the opportunity. I said yes. Start the betting pool NOW, folks. How many weeks til J comes to me and says regretfully – Um, Ahuva, I’m so sorry to tell you this, but, your gardens have to go. LOL. I’m starting the betting at 4 weeks. 🙂 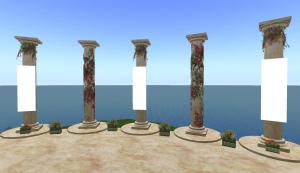 Anyway, I have been landscaping a sim where technical meetings are held. It is a monumental build: huge 20 meter columns. Very formal – marble, columns, stark. I started off just putting some flowers at the lectern and trying to get some flower boxes and greenery up. I wanted to get something done quickly so that my client would know that I was serious about working on her sim. (The picture at the top of this blog is how the build looks at the end of today. The next 3 pictures are the first pass at landscaping.) The first flower box has something I called fire tulips (when I was given them they were called “object”, so I figure “fire tulips” is an improvement. *grin*) and yellow lilies. I used red lilies at the lectern. 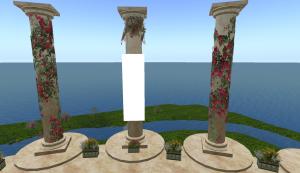 I knew that those columns were crying out for climbing vines, however. At first I thought that I would create a texture that combined the marble and roses and I would re-texture the columns. There were a few problems with that idea. First, the columns were locked – I needed J to give me the column and she was busy. Secondly, the roses would have been flat against the pillars. Both Honour and Hell suggested building a cylinder to encase the existing columns and to put the roses on that cylinder. I did one pass that way but I used too many repeats of the texture. On further discussion with Honour, I redid the cylinder – only one vertical and horizontal repeat. The encasing cylinder is actually 3 linked cylinders. As I placed the climbing roses, I could rotate the cylinder vertically so that the texture would vary. I also rotated the cylinder horizontally so that each pillar has a different look. I’m quite pleased with the final result. I hope you are also. 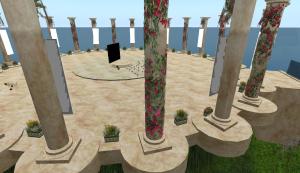 The pillars have signs on them. I wanted flowers there as well. Now one thing I learned from J was that it’s not really the quantity of prims that I use – it’s more that fact that I use so many different textures. So I have tried to use the same textures in this build, but modify them so that they look somewhat different. This is probably totally obvious to all you REAL builders out there but I was pleasantly surprised to “think up” the idea of copying and stretching the textures in a given plant and so changing the look that way: number of prims, rotation, size. I was a little stumped at first about the hanging baskets – I couldn’t figure out how to drape the flowers over the top and down the front. Honour to the rescue again. She pointed out that I should use a different style basket and the plants could grow from the basket itself. So the hanging baskets are more cascading roses, daisies and bacopa. 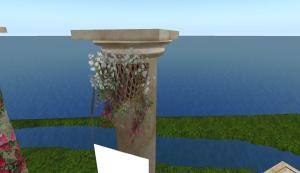 I was having a very stressful day at work last week. *grin* Nothing awful – just LOTS of it. So at lunch I retreated to my virtual garden and created a second flower box. It was so amazingly soothing and fun to do. 🙂 I made this one larger than the first. I felt more yellow was needed. I love yellow in a garden – so bright and cheerful. So this flowerbox is yellow lilies and daisies. 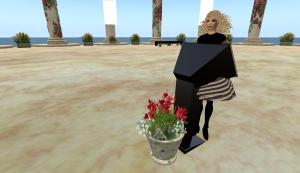 Once the climbing roses were up, I didn’t like the look of the trees between the columns. The green was too dull. And there was too much vertical-ity, if there is such a word. So I consulted with Honour, my landscaping mentor, and pulled the trees and moved the flower boxes. I think that tomorrow I will send a note to my client, asking her to take a look. I’ll be happy to add more flowers – I’d love to stuff the whole platform with multitudes of different colored flowers. But I figure my purpose here was to enhance the meeting area, not steal attention from the presenters. I’m very interested in my client’s feedback.