No, this is NOT about THAT kind of pet. So to all of you dear ones who have offered to collar me, sorry, I’m not rethinking THAT issue. *grin* My answer remains “So kind, but I must decline your offer.” 🙂 I am talking pets – animals, both RL and digital.

My beloved Simba has diabetes. We got the official diagnosis last week. Sigh. Major sigh, actually. Okay, diabetes is not immediately fatal, there ARE things you can do. Such as special food and insulin injections twice a day. Yeah, right. You see, my current crop of cats is crazed. We have had them 7 years. Seven years of love, kindness, pampering, affection, gentleness. But apparently being left in a dumpster at birth scarred them sufficiently that not one of the 3 likes to be picked up. Not one of the 3 really lets us approach them directly. They will come sit and cuddle on THEIR terms (I know, how like a cat). 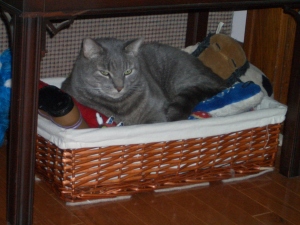 But to try to catch them and say, take them to the vet, or ha ha ha – give them a shot?? Just not happening. So I was looking at a death sentence for Simba. I love Simba. I refuse to let him go without a fight. The first day I had his meds, I loaded the syringe and waited for an opportunity to seize him. He was so weak, I figured no problem. But since we’d already taken him to the vet that week, he wasn’t coming anywhere NEAR us. Round 1: Ahuva 0, Simba 1. So I took the food away. *evil grin* Yeah, won’t hurt the girls any to go without food either. So the next morning, all three of them were looking at me accusingly. FEED US!!!!! Well, that worked. Greed overcame fear. While Simba pigged out on special WET food (they NEVER get wet food) I came up behind him and injected the insulin. This method appears to be working. I hide the food during the day. I feed them twice a day, Simba getting wet food. I come up behind him while he’s eating on the window seat, and I inject the insulin. At this point we just finished Round 14: Ahuva 12, Simba 2. Oh yeah, Sunday morning I stabbed my finger, but didn’t inject myself. *grin* Unlike eating the dog’s meds. But each round is exhausting, dinner especially so. Simba knows I am coming and even tho’ the whole thing is less than 5 seconds, he doesn’t want it. So some rounds get drawn out – I have to remove the food, put it back, go off schedule. Trust me, there is no way I am on a regular 12-hour schedule. Even though I am “winning”, the daily scrimmages are simply exhausting me.

Using a script I got the name of avatar etc. I IM’d ANGELBABY (yeah, she spells her name in all caps. blech). [2009/09/21 8:56] Ahuva Heliosense: Hey there Angelbaby. My rooster tells me that you killed him sunday morning. 🙂 I was wondering what happened?
To her vast credit, she REPLIED. I admit: I was totally stunned. Of course, she said that she had no clue what I was on about. So, she actually lost points for poor grammar. LOL. Seriously – I was totally impressed that she answered me. I figured a rooster killer would not have any manners whatsoever. So I wrote back:
[2009/09/22 13:06] Ahuva Heliosense: Thank you for answering, Angelbaby! I live next door to T on M—- I know she and her friends fly lots of cool vehicles etc. I had a sion chicken rooster in my water. If an object comes in violent contact with it – like lands on it, for instance – it dies. it is a no-copy item. when it dies, it gives me the uuid of what killed it. and it gave your uuid.
[2009/09/22 13:08] Ahuva Heliosense: so i was wondering what happened. I see that you are relatively new to SL. maybe T knows more about sion chickens,maybe not. but i was wondering what happened – if you landed on it, or dropped something off her skybox accidentally. because, i was rather fond of my pet, had it for months. and now it’s dead unless i buy a resurrection kit. so i’m curious about what happened. thanks!
Well, ANGELBABY did reply again, but again denied all knowledge, said I should contact T, that she doesn’t live in a sky box.

Sigh. Well, ANGELBABY is a noob – only came inworld in July. According to her RL profile she’s 18. What I WANT to do is write back and tell her I’m sorry she has no clue, that maybe she needs to learn a bit about life and manners and responsibility in RL and SL. She destroyed my property. Ignorance is NOT an excuse for not accepting and realizing that you have done wrong. I think that I was fairly restrained and polite in my IMs. If someone had sent such messages to me, I think I would have replied asking for more information, not simply reiterating that I was an ignorant git. (I’ve been hanging about with the UK folks too much, I think. 🙂 )
I have contented myself with banning her from my property, which runs the full length of T’s property. I hope that banning her causes her some inconvenience. Maybe that will encourage her to learn about SL manners and rules when she can’t fly over my property. LOL.

I also received a “pet” that requires no maintenance, unlike Frenis. Unlike Frenis, Bad Horse only makes noise when I touch him. (Folks – do NOT go there, really.) Bad Horse is yet another gift from an SL friend. The same friend who taught me about Wilkinson’s Family Restaurant a few weeks ago. *grin* I LOVE that video still. This friend has sent me several other video links that have made me laugh and I’ve passed them about. But Bad Horse….. well. I was dancing to Komuso. Oh wow, I LOVE Komuso. WHY doesn’t he play more often???? So when I got the inventory labelled “Bad Horse” I was torn.

Didn’t want to stop dancing, but I wanted to see what it could be. I mean – Bad Horse – that could be sooooooo many things, no??? So I IM’d to ask for more information. And was told: It’s from Dr. Horrible’s Singalong blog. Okay, I confess – that did NOT help in the least. I started googling. LOL. I have not watched all of this. I’m not sure I will EVER watch all of this. Certainly the synopsis is interesting. I’m told my niece Darcey LOVES it. My coworker has indeed heard of it. My SL friend HAS been right on the other links, so maybe this one is okay too. YOU watch them first and let me know. But in the meantime, I have a horse that sings the Bad Horse song from Dr. Horrible’s Singalong Blog. The lyrics make me laugh and cringe. LOL. Much like Wilkinson’s Family Restaurant, come to think of it. *grin* For those of you who have no intention of following EITHER of those links: Bad Horse , the Thoroughbred of Sin, is the leader of the Evil League of Evil. Dr. Horrible wants to be accepted to the Evil League of Evil. Bad Horse informs him that the league will be watching for Dr. Horrible’s next heinous crime (“Bad Horse Chorus”). Oh – Bad Horse is a horse and communicates via three cowboys, the Bad Horse Chorus, who sing his messages by telephone or in accompaniment with written letters. C’mon, you KNOW you have to at least read the links, even if you don’t watch the show.

One thought on “Rethinking the Pet Issue”