I guess it’s really winter. At least in Taylor Bay. Honour froze the bay, made it snow, and in general forced me to find my winter clothing. My inventory is a disaster but “search” found winter clothing, boots and even gloves!!! But that’s not enough warmth for me. Honour found me huddled by the burning barrel.

After scoffing at me, she suggested we move by the REAL fire – the bonfire. So having admired the fire particles in the barrel, I went off to stand by the heat of the bonfire.

Honour is being the consummate hostess. She has put out free skates for all PLUS a snowball fight. Since she is Canadian, she felt compelled to put out hockey. I confess I do NOT see the appeal of this sport. Probably because the arenas are too darn cold for me to go to a live game. 🙂 I’m just not good at doing cold. But hey, this is SL, so I was a good sport and agreed to try the hockey. OMG. Could the skates be any uglier????? No wonder I couldn’t move. My feet rebelled in shame. 🙂 I tried to get the dumb puck into the dumb net. 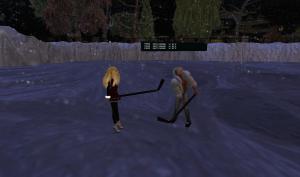 Even in SL I have absolutely no aim or control. LOL. You should see me bowl. Although I AM good at baseball – I can indeed slam that ball. Go figure. I tried my best to score a goal but the ugly skates prevented me from functioning. That’s my story and I’m sticking to it. I changed to my “real” skates so I could function properly, in Ahuva-style.

Faust came inworld to join us. He really needs some winter clothing. I found a man’s ski jacket and passed it to him, but I wish he’d wear a warmer shirt. Sheesh. I nearly had to go back to the bonfire I got so cold looking at him with no gloves and an open jacket. 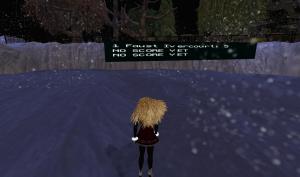 Faust soon figured out the sweet spot on the ice and was making goal after goal. He’s up on the leaderboard! You’ll need to head to Taylor Bay to see if you can beat his score. Me – I’m looking for wherever it is Honour has the hot cocoa. I’ll curl up there and watch the hockey in warmth and comfort. 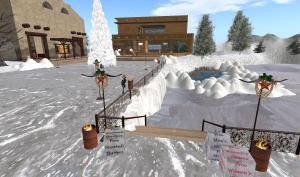 One thought on “Winter in Taylor Bay”