This week the blogs and tweets and plurks were buzzing. The Frank Lloyd Wright Foundation withdrew its license to the Virtual Frank Lloyd Wright Museum in Second Life. This is the kind of news that makes me very sad. When I talk about fighting the darkness, the darkness includes such dispiriting news. I will concede that there could be all sorts of issues involved of which I am unaware. But as a simple resident of SL, as a person who enjoys creativity, art, architecture, loves many of Frank Lloyd Wright’s creations, well, I just don’t see why this has to be.

There was a tribute to Frank Lloyd Wright in SL. It seemed back in September 2010 that the RL FLW organization had recognized and welcomed this tribute. But come December apparently there was a change of heart. And in the now-famous tradition of this century, a cease-and-desist order has come through to shut down what was intended as a joyous celebration, not an intrusion or rip-off. Sigh. There is only one week left to see the FLW sim. I urge you to do so. 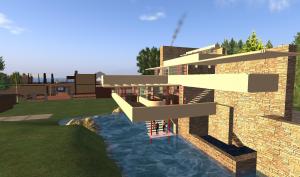 Many people have blogged this far better than I. I refer you to two blogs in particular, which both have other links. Betterverse, a blog devoted to non-profits in virtual worlds has a very good write-up. ArchVirtual, a blog for Architecture and Design in Virtual Worlds has a very heartfelt post by Jon Brouchoud as well as links to many other reactions to this forced closing. And of course Honour McMillan has some lovely photos of the SL site. 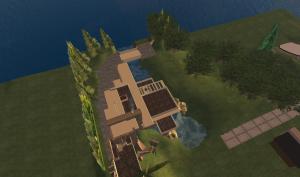 Last night was the farewell ball at the Virtual Museum. It was EXTREMELY crowded and very laggy. Not exactly a surprise. For the first time ever, I crashed when I attempted to take a photo. So I switched machines, lowered the photo quality and tried to not focus on gray semi-shapeless forms. Go see the museum for yourself, while there is still this one week left to enjoy it.

2 thoughts on “Goodbye to Falling Water”