Faust is back! Yay!! 🙂 And Faust loves Steampunk. He headed off to do some shopping and discovered that there was a hunt in progress for the month of March. It’s the Steam 4 Hunt, running March 1-31 and you can read all about it on the Steam The Hunt blog. The blog lists the stores, has pictures of the great prizes and contains more information as well. 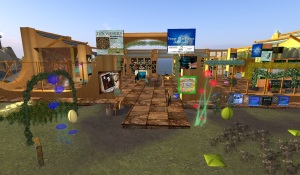 I joined up with Faust in the second store and was so intent on finding gears that I forgot to start taking pictures until a few stores later. Certainly the first few stores were INCREDIBLY cool and interesting. I started taking pictures in E&D Engineering. The textures on sale there are simply fantastic! I was itching to start building just so I had an excuse to buy the textures and use them.

Dale joined us there and we wandered about looking at all the items, not even trying too hard to find the gear. *grin* Deep Blue Sea Designs was another fun and appealing store. Faust was finding gears and I was wandering about admiring all the neat things for sale and the playful build. Oura joined us by the time we reached the Yellow Jester so she was there to admire Dale’s acquisition: a jester hat! I nearly added to my rocking animal collection at Capalini Fine Furnishings in Babbage. Faust and I spent quite a bit of time rocking away. 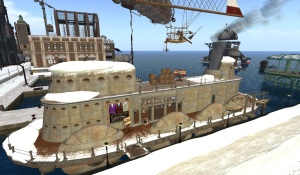 Michele joined us at that point and the five of us kept hunting. And shopping. I have to say that from a store owner’s perspective, it was a successful hunt since all five of us bought items along the way, not just grabbing prizes and tp’ing out.

The next day Faust enticed me back in to keep hunting (he’d long since jumped way ahead, collecting gears and fantastic prizes). The store itself was quite small but was packed full of goodies. Xcentricity in Babbage is wonderful, just wonderful. The sim is fun and VERY steampunk. The store is full of intriguing objects. I really want the Rocket Boots. Not only do they look like fun, 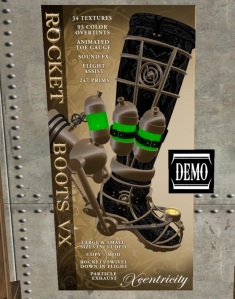 but they remind me of a friend who no longer comes into SL very much. 😦 Faust planned to go back for the Gatling Gun Top Hat. I may NEED a pith helmet, as well. 🙂

This is DEFINITELY a fun hunt. I don’t think I’ve even unpacked most of the prizes. The stores themselves have been the real prize and pleasure for me! Faust has been enjoying himself. He has promised to write a post in his inimitable style, cluing us in to his experiences. *grin*