Bamboo and I had a free afternoon. We waved hi to all our friends who were online. Lalo waved back and said he was flying his airship over a parade at Bay City. Bamboo had never been in an airship (I’m not sure he’s ever been in a plane, come to think on it) and so we asked if we could tag along. Lalo sent us a tp, warning us to be flying when took the jump. *laughing* i’ve never flown with Bamboo before. It is hilarious! He slides off my shoulder and hangs there, clinging as if in fear of dropping off. Aw, my precious Bamboo…. I’d never let you drop.

We rezzed at Lalo’s airship and sat in the back. Bamboo immediately began begging to fly the ship. Well. I mean, really. He’s just a little guy. But Lalo was so kind to Bamboo – and let him come and sit up front and HELP fly. Bamboo was THRILLED!!!!!! He sat right up there with Lalo and watched the dials and helped make the turns.

We were hovering above Bay City, where the citizens were going to be celebrating its 3rd anniversary (I think I have that correct – Lalo blogged about the EVENT. *grin* Somehow MY post has been co-opted.)

Unfortunately my draw range was only 512m, so I missed the start of the parade, but I did see them once they crossed into the parcel below us.

The parade was led by purple convertibles, then the large snails. The sky was crowded with other flying objects (vehicles AND people) and there were boats along the shore. Around about that time my laptop crashed – graphic overload, I guess. So while that one rebooted, I rezzed back in on the other machine. That didn’t last too long either. So I went back to my gaming computer and was a bit more cautious with camming and clicking. The party was great fun, with good DJ’ing and live music, lots of dancing. The complete set of party pics, including closeups of the party-goers, is up on my Flicker account.

All too soon, however, it was time for Bamboo and I to head home. Bamboo was flying high emotionally, as well as digitally. He has bonded with Lalo *grin*. He has decided that they are “best buds”, “guys together” and are “both furry”. I, of course, am chopped liver. Merely his mom. *grin*

But Lalo has been wonderfully kind to my little panda and has humored him, even bestowing the nickname ‘Boo on him. *grin* Bamboo is thrilled. When we landed at the airport and thanked Lalo for a fantastic afternoon, Lalo told Bamboo that he had earned his wings! /me grins. I’m not sure I need to tp us home – I rather suspect ‘Boo could have flown us there simply from joy. 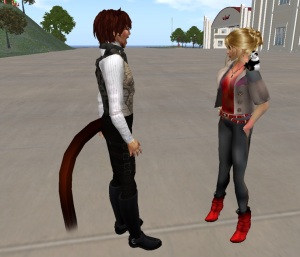 2 thoughts on “Bamboo Earns His Wings”