Let me say first that I do NOT know WHEN we are leaving. This is apparently highly confidential, top-secret, “we have to kill you if we tell you” information that the moving company does not care to share. No, I don’t understand why not and I’m not pursuing it. Yes, they ARE a national moving company with franchises across the country. Trust me – when I know I will tell you.

We DIDN’T leave yesterday (obviously). Honour spent the day packing and running errands and in general, I think, running about like a crazy person trying to do everything that needed doing. I, always eager and willing to do my part, stayed out of her way. *grin* And who says I’m not helpful and thoughtful???? Clair and I went shopping and running about town. Ah, a note about my “running about”. One of my friends was soooo concerned about me being in the great vast wilds of Canada. She wanted to microchip me so that I could be found. Instead I got a cool app called Life360 on my phone. My sister and niece put it on their phones and we all had fun playing with it and seeing where we were going and where we were. My husband has a flip phone. That means, for those of you who don’t know what a flip phone might be, that he cannot put apps on his phone. I know – it’s a bit like a rotary landline kind of phone. *grin* I thought that maybe he’d like to be able to see where I was so I gave him my login information for the website version of the app. He was like oh yeah whatever. I spoke with him yesterday and he was having such fun tracking me all over the Vancouver area. *grin* Who knows, maybe this will help convince him that a smart phone might be a good idea.

Clair and I went shopping and I found a present for Honour and me – an army knife. 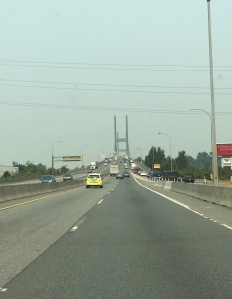 It was at a store that sells used items so it was VERY inexpensive. It was Tuesday, which apparently is discount day in Canada, and that meant an additional 30% off the price. I have to leave my wonderful Swiss army knife home when I fly so the TSA doesn’t confiscate it. I miss it terribly because there are so many times I need a blade for opening something, or a little scissors, or the tweezers. This knife is nowhere near as good as that but it does have the blades so we will have it handy if needed.

While we were driving about we had to cross water a few times – sometimes over, sometimes under. 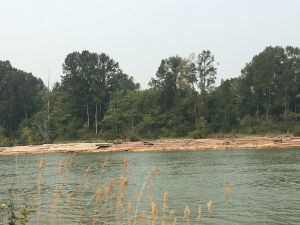 If you look at a map of Delta, BC, you can see why it’s named Delta. Or as my friend said – a highly original name. Not. Some of you know the stories of me and my nightmare bridge. The original nightmare bridge is the Delaware Memorial bridge connecting NJ with Delaware. Clair and I were tootling along in her adorable red convertible (with the top down of course) when I looked ahead and saw this bridge LOOMING in the distance, rising up like the Dark Tower of Sauron. I asked “Are we going over THAT?” and of course the answer was yes. I did what any sensible person would do – started taking pictures so that I could blog it. 🙂 I have to say that although it looked nightmare-ish from a distance, it was the effect of the tower, and the actual rise and fall of the road was not that bad. But it did trigger the “nightmare bridge” quiver.

I’m a terrible travel blogger because I never remember to get the names of places and things (like that bridge). 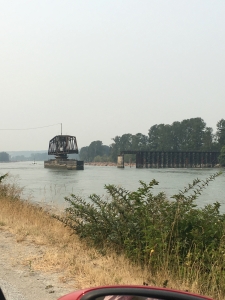 We had a lunch and then headed home the scenic way – along the Fraser River – hence another picture of the logs stored along the river banks. 🙂 As we cruised along, I saw another bridge – the kind of bridge that interests my husband (as opposed to the kind that makes my stomach turn over). We once used up 2 or 3 rolls of film in Maine taking pictures of the underside and sides and bridgekeeper’s booth of some bridge that was the last one of its kind in the country (see – I really stink at travel blogs. I’ll try to ask him what kind of bridge it was.) So this railroad bridge is for my husband. 🙂

Life being what it is, we ran into a huge traffic jam. Remember all that water that needs to be crossed? 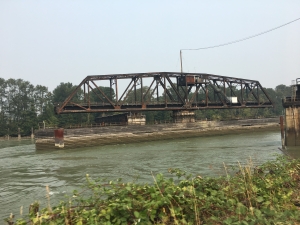 There was an accident in the tunnel that we had to take. Traffic was crawling on the approach (I felt right at home 🙂 In a red convertible, stuck in traffic, but with the sun and fresh air on and around me feeling great). I missed another perfect opportunity as we passed a vineyard with a great sign: Sips happen – Come in and Wine. That sign would have been a great picture. And I don’t remember the name of that place either. 😦 Something meadows maybe?

We made it through the tunnel eventually and back home where Clair needed to prepare for arriving guests. We met up on the front porch this time for spritzers and sat there chatting and laughing until Phil (guest) arrived. He joined us for for a spritzer and we compared notes on travel, work and life. He confirmed that not only do Jersey Girls Not Pump Gas but Oregon gals do not either. That is the other state where attendants must pump the gas. He headed off to do his thing, I verified that Honour was alive and well (but not interested in dinner) and Clair and I headed out for Greek food. There was a nice little restaurant about 3 blocks away where we sat outside on the patio. We had a pleasant upbeat waitress and we wined and dined and then headed on back home.

I think I’m adjusted this morning to the correct time zone as I was sound asleep by 10:15 and woke at about 5:30. I got up, washed, brushed my teeth and got dressed (that last list was all for my sister, who will get the joke. Oh okay – I’ll share. Our mother always used to enumerate those tasks as things that ‘had to be done’ whereas to us they were/are things that just get done without mention). I took my phone and laptop out to the front porch to blog. (See the sunrise picture up above). As I wrote the latest guests, who arrived well after I was asleep, came out onto the porch to say good morning. But that’s a post for another day.

4 thoughts on “Passing the Time”