We are ON OUR WAY!!!! I wish I could take a picture of this moment for you.

We are cruising on Highway 1, the cats quiet in the way back, Jamie quiet in the back seat, and Honour and I singing along with Adele. We did set out at 7 am but only to go to the store for ice, Starbucks for coffee and bagel. We sat in the parking lot and set up the GPS, the multi-charger and the trip odometers. We did discover that one of the outlets in the car does NOT work. But since the multi-charger has a zillion USB ports, we plugged the GPS in that. We have also learned that duct tape does not stick to the dashboard of Honour’s car. WHY would we have learned this? Since we have to use the USB port for the GPS, the GPS can’t be mounted on the window. I thought I could duct tape it to the dash (what? You DON’T travel with a roll of duct tape????) but to my great dismay and astonishment – duct tape wouldn’t stick.

I must say this crushing on a personal level as I have ALWAYS put my faith in the power of duct tape.

We have also found that the seat warmers in the car work GREAT. Because the GPS is now sitting on the console, which is also where the seat warmer controls are, Honour discovered that her tush was getting extremely warm and begged me to fix it. I got out the manual and found that indeed, there were seat warmer controls and that Hi warms up more quickly than Lo (I swear – that is exactly what it says in the manual.). I am not very good with universal icons. I really prefer words. Unfortunately for me, this manual is very short on words and very big on universal symbols. 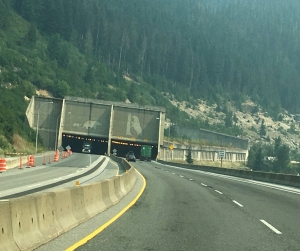 We had to wait for the next red light so I could show Honour the picture because I thought it looked like an arm rest but could not see the buttons on her arm rest. She looked at the picture and said – that’s the console! So I moved the GPS and indeed, there was the seat warmer button. It was on Hi so we can confirm that not only does it work but Hi does warm up very very quickly. I turned it off.

We have had our first spat, concerning road names and numbering. I think Honour has decided on this matter she needs to humor me. I have the maps, the trip tik, the phones, and the GPS. She may have the steering wheel but I think I have better cards if she ever wants to get where she’s going.

I have also learned that Honour has an even bigger bridge phobia than I do. This from a woman who has spent the last few decades in a place named Delta, surrounded by water and bridges. This means that right from the get-go, we deviated from the Trip-Tik and all of the well meaning advice I have been given over the last 3 days. Rather than taking the recommended routes to Highway 1, which ALL involved bridges, we headed east on the local rural back roads. I resorted to the GPS and my phone since I could not find the roads on the map. But credit where credit is due. Honour was correct and we met up with Highway 1 far east of where the Trip-Tik would have met it. So we are, as I type, computer plugged into the wonderful multi-charger, just about to reach Hope, BC.