Well. THAT was a long day. 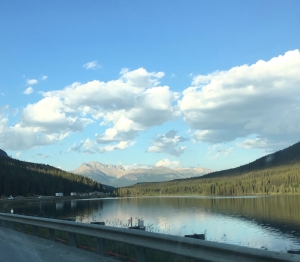 That one day should have about 5 separate posts to cover all that happened. We got on the road around 8am as I mentioned. We made it all the way to Merritt (about 3 -4 hours) where we stopped at the Walmart. My sister, an avid RVer has assured me that the first stop on ANY cross-country trip is at the Walmart for whatever you forgot. We decided we wanted to get shades/filters for the rear windows of the SUV for better protection for the cats (the windows are tinted but it was feeling warm to us and we were concerned for them). We picked up some lunch for Honour and some rice crackers for me (I had breakfast, she didn’t) and gas for the car and a piddle break for the dog.

I should probably do a post just about the wildfires burning all through BC.

I’ve been joking about the haze and not seeing the mountains, but in Merritt it abruptly ceased to be amusing. We stepped out of the car and could not breathe. There was so much smoky particulate matter in the air. We were coughing, our throats scratchy and dry. Haze so thick you couldn’t see the mountains. It smelled. It was akin to sticking your head into the smoke from a campfire. We looked at all the people walking about without masks, having their windows open, dogs hanging out of car windows panting. I have never experienced anything like that – not even the time we went to help a friend collect what was left when his apartment burned. I don’t understand how these people are getting by day to day with this air.

The car was coated in light soot. I shudder to think what is happening to everyone’s lungs. We were very happy to get back in the car, shut the windows and keep driving.

After Merritt we made it to Kamloops where nothing really fascinating occurred except we stopped to see if Jamie wanted to accomplish anything. Apparently Kamloops was up to the task. I must agree with her, based on the radio stations. We continued on our way to Revelstoke. It was after Merritt that Honour learned why my husband and son hate to drive with me. “Oh!!! Take a picture of that!! Take that!!! Did you get THAT picture???” If I had a penny for every time Honour said “of for pete’s sake woman!” we could charter our own jet and fly with the cats and dog and car all the way to Bay of Fundy.

On the other hand, I DO have photos!! I will at some point even crop them and insert them into this blog. The road to Revelstoke runs along Shuswap Lake – a HUGE beautiful lake with many resorts and lodges for water and mountain sports. Everything was quite beautiful with mountains and lake and, of course, the ubiquitous haze.

We stopped in Revelstoke for gas, stretching and Jamie’s convenience. There was a bridge so of course I took a picture of it. I have learned that A&W is EVERYWHERE in Canada. I had no idea I was in the birthplace of root beer. What a shame that I don’t like it. As for filling the gas tank, Honour thinks (and I agree) that we are best served by stopping for gas when it reaches half a tank.

After Revelstoke we began the real climb up into the Rockies. We were already up high in mountains and I asked Honour – is THIS the Rockies and she said no. And I said – how will I know? And she said – They’re going to get bigger. So leaving Revelstoke they did inded begin to get bigger. And I would have been half-way to purchasing my private jet. We realized at one point that we could actually see shadows on the road and that there was sun – and MUCH less haze. We could see many mountains, not just the one in front of us. 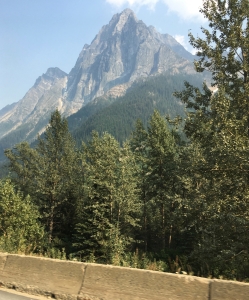 It was gorgeous. Breathtaking. I can look at mountains all day long. We made it up to Rogers Pass, which my map informs me has an elevation of 1327 meters (4364 feet). The time changed at Rogers Pass – we lost an hour. Probably tossed it in the garbage back in Revelstoke when we cleaned the car.

Honour has been getting weather advisories on her phone and we had been getting advised that the air quality was poor just about everywhere in British Columbia. As I mentioned, I’m not sure we need someone to tell us that. We turned the corner, so to speak, out of Rogers Pass and saw white smoke. More and more white smoke as we drove. As you know, where there is smoke there is fire. Although we did not see the actual flames, we could indeed tell where each separate fire was burning. There were helicopters flying fairly low carrying huge buckets. As we watched (and as Honour took pics while I said – did you get THAT? Do you see the helicopter? Look at that. Look THERE!) one of the buckets was emptied above the fire. Honour did indeed catch that picture. I have been teaching Honour a lot about the electronics in her car and phone and everything else (think seat warmer) but I forgot to teach her the zoom on my phone.

BUT we still do have a really good shot of the fire fighting in action. Again – this may not have been the experience most think of for crossing the Rockies and seeing mountains, but it was quite awe-inspiring. Seeing those many many fires burning away really brought home, along with the air, what “wildfires” means.

We decided we’d drive to Banff and get a room there. So we got back on Rt 1 and headed out of town. Heading out of town on Rt 1 entails a descent down a mountain. A very curvy steep descent. Where our lane is on the outside. Did I mention Honour doesn’t like heights much either? It was an interesting ride. I did mention (gently, I hope, although perhaps I am mistaken) that it would be a tad easier on me without the soundtrack of gasps, pants and “the speed limit is 5km (that’s a lie – the km, not her saying it). I suggested that she close her eyes and not watch but she was the proverbial deer in the headlights.

As the sun set gently in the west behind us, we continued through the Rockies with me saying “boy are you lucky it’s too dark to take pictures”. We pulled into Lake Louise. 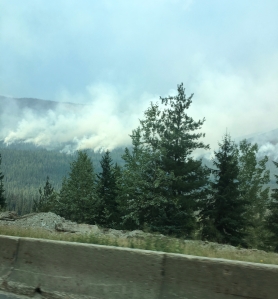 Oh my that is absolutely gorgeous!!! You might not know this but that’s a national park too. And there are only 6 hotels in the Lake Louise vicinity. This was not the information we’d hoped for. We sat down to eat some dinner and got out our phones and began searching for hotels. Not just any hotel, you understand, but one that would take pets. Oh – did you FORGET about Jamie and the boys? I found A room in Canmore (about 30 minutes further down the road) but alas, they didn’t want Jamie. We found their attitude offensive and decide the heck with Canmore if that’s how they were going to behave. Looking past Canmore there’s not really much until Calgary. Calgary has an airport. Airports have hotels. We were pretty sure we could find a room for all 3 of us (the boys said they preferred to room in the car) at SOME hotel there. 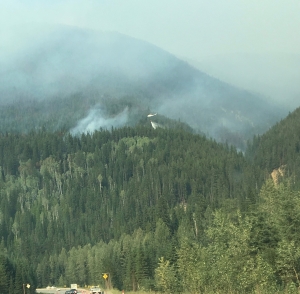 Indeed we called ahead and book a room in Calgary, another 2 ½ hours eastward.

The drive to Calgary was, thankfully, uneventful. As we neared the city, we had a wonderful lightening show in the sky. I said it must be heat lightening because we had no weather forecast showing up and it was the sky lighting up, not bolts seen in the distance. None of the uncoming cars were wet. Obviously, heat lightening.

INTERLUDE: I have not told you about Duff.

Neither Fergus nor Duff are really enjoying this adventure. Fergus has made that clear periodically. I do hope my cats don’t know those words. Duff, however, has passed beyond speech and sat frozen in the back of the crate, eyes larger than any eyes have a right to be, growling whenever Honour attempted to go near him. We were both getting a bit concerned about Duff. We decided that maybe we needed to find a doctor in Calgary and let Duff spend some time on the analytic couch. We are also supposed to be meeting up with our friend Calli, who lives somewhere in the prairies of Canada. East of Calgary but we really weren’t sure were exactly. She’d emailed us to ask when we thought we’d be there. As YOU all know, the answer could be tomorrow, next week, never. I sent Calli an email saying “not sure when, need a vet, please call if you can”. We reached Calli as we were approaching Calgary. She had some brilliant ideas on what we might be able to do for Duff. Her suggestions were very helpful but even more importantly – they helped calm us down a bit with regard to worrying.

We got off the phone with Calli just as I was reaching the hotel. And a few sprinkles of rain began. And them more rain. Heavy rain, Loud on the roof rain. We were exhausted, we were worried about the cats, and we’d been on the road for 15 hours. As I pulled the car under the hotel front carport it began to hail. We watched another guest come out and start taking pictures of the hail. I guess it wasn’t heat lightening. But we didn’t care. We were there and the hotel had COVERED parking. I staggered to the room as Honour got the cats as comfortable as they were going to let her get them. For Duff – not very. But it was cool, it was dark, it was quiest and they had food and water and they weren’t moving and we figured things might be a bit better with them when we saw them in the morning.

Jamie, Honour and I did all the necessities and fell asleep. For hours. Uninterrupted, in a bed, quiet hours.