I’d known for several days that we would be heading to Wawa, Ontario. This intrigued me greatly.

I know that there are people reading this blog from many different locations, but there are folk from NJ among you. We Jerseyans have a convenience store called Wawa (I tend to buy my gas there). I was SURE that there must be some connection between Wawa Ontario and the convenience store as I’d never heard of any other Wawa but the store. Alas, this is not the case. I did finally do a search on the store and discovered to my great surprise that there is a Wawa, PA and THAT is the source of the stores. Live and Learn.

Honour has been telling me (repeatedly) that ‘back in the day’ it was the ‘done’ thing for young ‘uns to hitchhike across Canada. Everyone would do that and it worked great until they hit Wawa. 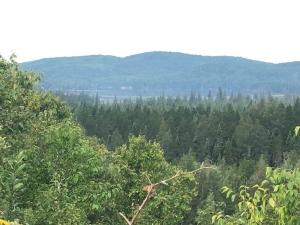 For some reason, no one would pick up hitchhikers in Wawa. It was common knowledge and there were T-shirts and such about “I’m stuck in Wawa”. Truth be told, we DID see someone hitchhiking on Monday morning as we headed from Wawa to Ottawa and we did NOT pick him up. I’m sure it had nothing to do with the fact that our car was packed to the roof with animals and stuff. Historically the town is known for mining, forestry, and the fur trade, whereas today it is popular for snowmobiling and sport fishing. 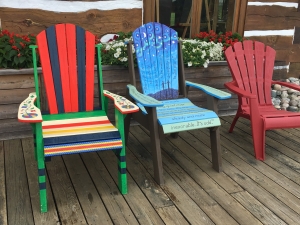 Wawa is also known for its goose. Quoting here from Wikipedia: The community is known for its 8.5-metre (28-foot) metal statue of a Canada goose, which was built in 1960, and dedicated to the community in 1961. Wawa takes its name from the Ojibwe word for “wild goose”, wewe. Wawa was defined as wild goose in The Song of Hiawatha. On July 5, 2010, Canada Post made a commemorative stamp of the Wawa Goose as part of its Roadside Attractions collection. It’s hard to miss the goose. 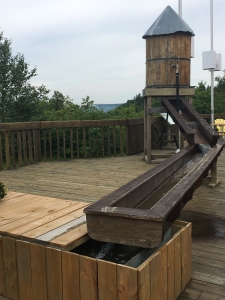 It is obligatory to take at least one picture of the goose. Far be it from me to argue. I have pictures of the goose, and pictures of what the goose sees (as it gazes down at Lake Wawa. Unless of course that water is really the Michipicoten River but I’m fairly certain the goose is looking at the lake, not the river. 🙂 ) We had breakfast at the Tim Horton’s (you can’t be in Canada without at least ONE coffee from Tim) and went to see the goose. There is a lovely welcome center giving a history of the area, with a demo mining setup. I loved the flowers and the view – mist rising off the lake. Jamie liked the lawn. We were parked next to a family who were traveling with 2 cats as well.

THOSE cats were roaming freely about their car (probably because no one had been thoughtful enough to give them a cat bed under which they could cower). The family was relocating from Ontario to Vancouver. *grin* Apparently lots of Canadians criss-cross the country, moving here, moving there. Not just Honour.

Ontario is filled with trees, hills, water and rocks. I took a zillion pictures (Honour was driving). I have pictures of the rocks along the road, the trees and lake, the vistas. I have to confess – beautiful as it all was, it DOES tend to blur a bit and look the same after awhile. I would gasp “oh look it’s so beautiful” and take a picture. 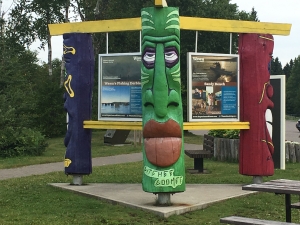 Looking at all of these hundreds and hundreds of photos – it’s a bit hard to distinguish one view from another. 🙂 I will tell you also that it’s a bit difficult to take pictures from the car when the driver refuses to slow up EVER, even when there is not a single solitary person ANYWHERE in sight. The world might have ended for all the other traffic we saw but when I’d say “stop, slow” I heard “we’re on a road”. Sigh.

We were on Rt 17 heading south to Sault Saint Marie. We stopped along the way to get gas, make a phone call and shop a little (see the prior post with the adorable stuffed moose (not a REAL stuffed moose)). This is where we saw all the people who were NOT on the road with us. There was a line for gas. There were tons of cars in the parking lot and the stores were bustling. We probably spent way too much time there before we headed back on the road to Sault Saint Marie.

We stopped for lunch at an A&W (we were doing all the traditional Canadian dining spots). I confess – I was pleasantly surprised. I was able to get food that was NOT fried. Truly appreciated. While we were sitting there the Travel Agent in the Sky pinged us and told us we HAD to go see the locks!!! We were RIGHT THERE!!! There was a lovely woman sitting next to us who began to give us directions, but she wasn’t certain if it was this street or that one. In the meantime the TAITS had texted me directions. 🙂 We were indeed only 10 minutes from the locks. We headed over there.

We wanted Jamie to join us but in this location we really thought she needed to be on a leash. Unfortunately her leash was somewhere in the car (*gestures helplessly to the mess that was our car). Honour, undaunted, found a solution – the towing rope included in the car kit. 🙂 Yes, she led that 5 pound little fluff ball with the bright yellow 2 inch wide cord with the 5 inch long clasp. This is another occasion where I have several dozen photos but I’ll restrain myself to just 2 – one each direction from the middle of path over the lock. I can not, however, resist sharing a picture of the truck carrying all the logs. It fits my trans-Canada theme.

The logs might be coming from BC, where I’d seen logs lining the river banks. I know, I’m a bit strange. Cope. 🙂

By now it was mid afternoon and we still needed to get to Ottawa. We’d gotten a bit laissez faire about the time. We knew that there would be street lights and buildings and such in Ottawa, so we were not too worried about arriving after dark. Indeed, we did not check in until 11:28 pm. That is significant because I’d set a goal for reaching the hotel by 11:30. *grin* It was helpful to have all those city lights after the blackness of our campgrounds in Wawa.

What we hadn’t counted on, however, was the sheer sameness of the road. It was at this point in our journey, I believe, that we succumbed to sign fever.

Once the landscape fails to enchant, and you’ve finished the really interesting podcast on S-Town, you need to find something to amuse yourself. We turned to road signs. 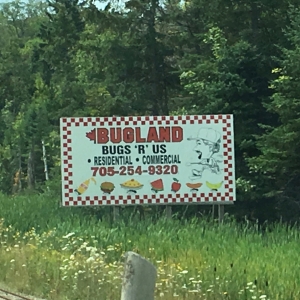 We’d been having fun with the moose signs along the road, but somewhere in Ontario the fun turned to addiction and hysteria. I see that I have pictures of “road curve ahead” signs and the traffic light in the middle of the trans Canada highway (it was red, of course), and yet another moose sign, all from the trip from Wawa to Ottawa. Little did I know that it was to get worse, much worse.