This was it! The last leg of the trans-Canada journey. We were arriving at the Bay of Fundy. We needed to get up early because we had to drive to catch the ferry. Some islands have bridge access, some islands have ferry access, some have both. We needed to take a ferry to get where we were going. I know that I have, at some point in my life, been on a car-carrying ferry but I cannot remember where or when. Maybe I’ve just read a lot of books and think that I’ve been on one. 🙂 As usual, Jamie, Duff and Fergus were really excited about their upcoming first-ferry experience. *grin*

Honour got up first (as usual) so she could feed everyone and head to a hardware store that opened very early so that she could buy a LOT of cleaning supplies.

She’d been warned that the house was not in the cleanest of conditions. In any case, she wanted to clean surfaces and such before moving in any of her belongings. Her belongings…. you know, we STILL had no word from the movers. They’d said it would take 7-15 days to get there with all of Honour’s furniture and belongings. We’d made it in 7. We were frantic in case the movers were hot on our trail and might get there before us. There was also the matter of payment. Apparently the deal was payment in cash.

Neither of us was carrying that much cash. Honour should have been stopping at bank machines all along, withdrawing her daily limit but somehow we never remembered to make that stop. The lack of sufficient funds was very worrisome since we did not know WHEN payment would be required. And yes, there is a point to why I’m mentioning all of this.

I got up and dealt with packing. This was to be my last night with Honour, so I needed to determine what was staying with her (my shampoo and such, you remember all of that, right?) and what was coming with me.

Honour “complicated” my chore by giving me the most spectacular thank-you gift ever – a GORGEOUS quilt, map of Canada, from one of the First Nation stores we visited. Obviously THAT was coming in my bag!!! My bad – I have NOT taken a picture of it to add to this post. Maybe I’ll give the blanket its very own post!

We got on the road early but neither of us really wanted food – just coffee. Of course there was a Tim Horton’s handy. 🙂 I had a feeling I was going to need a lot of energy so I got the darkest strongest roast and had it turbo’d with an additional shot of espresso. I was ready!

We had to wait for our ship to come in. 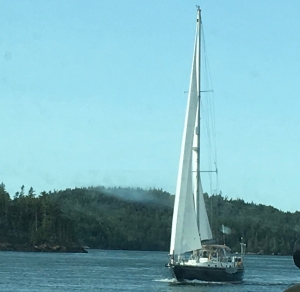 We met the couple behind us who were vacationing from Maine. Yet another small-world story. They were from White Plains, NY originally, a place to which I go frequently. 🙂 John and I were taking pictures and videos. His wife and Honour watched us, expressions of amusement and indulgence on their faces. Never mind – John and I had a GREAT time.

Once on the ferry and underway, he and I roamed all over the boat, taking pics of EVERYTHING. I have photos of the shoreline receding, the shoreline approaching, the seagulls, other boats, islands, water, sky. It was wonderful!!! The weather was perfect. I don’t recall if I’ve mentioned this or not, but we have been amazingly lucky with the weather. You can see the beautiful blue sky and puffy clouds as we made our way across the water.

We reached shore and docked and all the cars disembarked. *grin* Of course, everyone was getting onto the same local road so it was a bit of a lineup. But this was IT!!!

HONOUR’S ISLAND!!!! We had the map up but she didn’t need it. She’d been studying this island for sooooooo long she could have done this trip in her sleep, even having NEVER been here before. It was very very very exciting. We were both grinning and laughing. We were HERE!!! And there it was – HOME!!

We paused at the slight rise of the hill before her house, and then pulled up the street and into the driveway. HOME!!!!! 6032 kilometers and here we were. (I see that Honour has said elsewhere it was 6007 km, but I’m pretty sure we marked it as 6032. In either case – quite a journey.)

We jumped out of the car and raced to the house. *grin* You might be wondering when we got the keys. Oh, didn’t you know? The way we do it here is that no one locks their doors. I’m not sure if Honour EVER got keys; the sellers weren’t even sure if there were locks on the doors. 🙂 Yeah, that’s going to change real soon. Jamie, Honour and I began exploring. The boys were extremely excited as well (not) but we did not take them for the initial exploration.

First we had to block any possible hiding holes in the house.

We had a welcoming committee, although it was a bit shy and hurried off after the initial meeting. I’m sure snakes are good for SOMETHING in the garden? The house was indeed…. not clean. I think I’ll leave it at that. But it was intact and it was standing and it was Honour’s!!!! It has a FANTASTIC view and a nice piece of property. We could see that they’d already started digging for the septic system. We began the process of checking each room for cat safety. Once we thought we had every unsafe area blocked, we brought the cats in, one at a time. 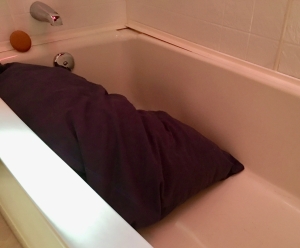 As it turned out, we’d missed a hole, but they came out that night and Honour had a chance to block it then.

We brought them in one at a time. They weren’t happy. Actually, Jamie wasn’t all that happy, either. Every time Honour went out to the car, Jamie sat staring at the back door, willing her to COME BACK. Even if she was only gone for 5 minutes, Jamie stared that door down. Duff came in/out first, meowed loudly and tore off to find safety. Fergus was next and did exactly the same. We began moving other items. I discovered Duff cowering in the bathtub on the first floor. Poor baby. He was so unhappy.

Honour suggested putting the cat bed on him and I did. *grin* He seemed much better after that. I did observe the bed moving around in the tub, so I knew he was alive. Fergus saw me and tore up the stairs to the second floor. Honour kept telling me that the boys had NEVER seen stairs before, but I must say that Fergus took to them like a native. 🙂 I guess nothing could be worse than being on the same floor with me. *grin* Honour spent the entire trip assuring all the animals that EVERYTHING was MY fault and that everything horrible was because I made it so. *laughing* I guess they believed it. 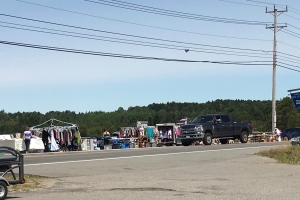 And it was okay with me because, after all, Honour has to live with them. 🙂

You might think that after getting everyone and everything into the house, we could sit and relax and enjoy everything. Not so much. We needed to go shopping and order appliances for the house. The realtor had told Honour that “the way we do things here” is to go to this certain US store and they deal with all the export/import paperwork, do delivery and (I think) installation. She needed a stove, refrigerator and other things as well. So off we went to do things the way they were done here.

We needed to cross a bridge to get to that town. All along the side of the road there was a flea market!!! 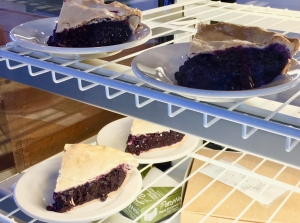 I mean it was on the shoulder of the road, not in an adjoining lot. On the ROAD! 🙂 Of course I took a picture. I KNEW we were in civilization because there was a DUNKIN’ DONUTS!!!! Actually, I really like Tim Horton’s coffee, too, so I’m not sure why DD was so much fun to see. Honour had a chance to check some email before we headed out. She heard from the movers (who had her cell phone number, you know, so they could have CALLED her or TEXTED). They were still in Alberta. You remember Alberta, right? That was day TWO for us. And by the way – a bank draft would be fine. So all our frantic attempts to accumulate sufficient cash in 48 hours (which failed, by the way) were unnecessary.

We stopped for lunch as well and I FINALLY got some Maine blueberries!!!! The pie was FANTASTIC and I only wish I’d been able to buy an entire pie to bring home.

Unfortunately I needed to go home. I would have stayed another night or 2 with Honour but we could not find any place that had 2 nights open. Honour could not take me to Bangor for a flight home on Friday, as she had to wait for various workers to come turn things on that day. Although, in hindsight, I don’t know WHO actually came to do WHAT, because everytime Honour had tried to reach Bell Aliant they told her “oh you’ll have to buy that equipment and install it yourself”. Honour is going to be learning a LOT of new skills on that island. 🙂 Our trip together ended with me in a Bangor hotel and Honour beginning the long trip back to her island home. 🙂 The fantastic view, her dog, her cats, her home.