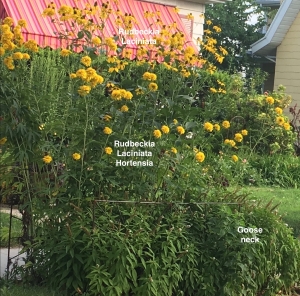 Many many years ago my friend Ulrike dug up a bunch of flowers from her wonderful wild garden and gave them to me. Two big garbage bags filled with enormous root balls. There were 2 different flowers in there – a yellow, sunflower-like thing and a white curvy thing that she called goose-neck. Both plants flourished in my front garden for many years. I discovered the white thing is indeed “gooseneck” or Lysimachia clethroides. It’s very hardy and is indeed aggressive and has spread along the driveway as well as taking over a good portion of the first bed. (Hey Debbie – I should give you some of these, too!) 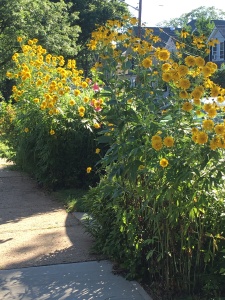 I LOVE the yellow things. A few years ago, however, they began to fade, perhaps because the gooseneck was choking them. I had them in 2 different beds so I still had plenty of them, but I was getting worried. My friend, who lived next door to my mother, had died and her house was on the market. She lived next door to my mother so one day I went over, found an inconspicuous spot, and dug up another 2 root balls. Yes, I know that was “wrong”. You know what was REALLY wrong? The realtor in charge of selling that house leveled that gorgeous garden, tore down the bushes, the flowers, the wild beauty of the back yard. Don’t lecture ME on ‘wrong’. The stolen goods emigrated successfully. I knew Rike would be thrilled that her garden lived on.

But I was growing worried. What WERE these flowers? My dog-walking neighbor loved them as well and always teased/threatened to come over and dig them up for his garden. I began searching online to find a match. It’s hard to search when all you have is “tall, yellow flowers”. I tried sunflowers. I tried tall yellow flowers. I tried 5 ft yellow flowers. Finally I found something that I thought was it in one of the seed catalogs and I ordered the seeds. The seeds DID thrive and they came up alongside my yellow things. BUT…. the leaves were the same, but the flowers were not. This is because I WAS close, but I’d found the single blossom version of Rudbeckia Laciniata instead of the double-blossom. Nice, but really not good enough. 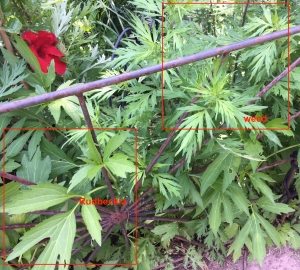 I continued searching and searching. One day I stumbled across a blog or a post or something somewhere talking about very tall yellow outhouse flowers (that wasn’t the exact wording that they used, however). When I looked at the photo, there were MY flowers!!! There’s probably a joke in there somewhere about my taste is in the outhouse or something. 🙂 They are called Rudbeckia Laciniata Hortensia. Next I had to find the plants online. For some reason I kept ending up with seeds when I wanted plants. 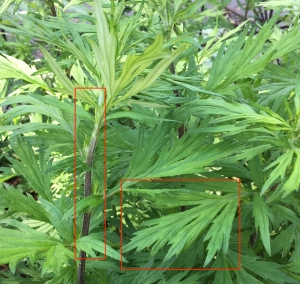 I called our local radio station garden show and explained my problem – I needed outhouse flowers and did not know where to get them. Peggy immediately found a website selling the plants: Heritage Flower Farm. I went online that very day and ordered plants. I’d never ordered plants through the mail before and had no idea how it worked, how the plants traveled, etc. I ended up emailing with the owner, Betty Adelman, who was wonderfully supportive, informative and encouraging. The flowers arrived healthy and as described and all of them grew up last spring. 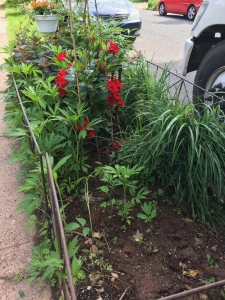 This spring I ordered 6 more Rudbeckia Laciniata Hortensia (along with many other plants). I planted them in the front with their brethren. I watched them take hold, begin to grow. I cheered them on. The the rains came. And came. And came. People drove arks to and fro. The flora LOVED it and everything grew green and tall and thick. I was thrilled. Until just a few days ago when my sister said to me “I’m confused. You’re always talking about your yellow flowers, but I have the same thing and when I showed it to my neighbor she said it was a weed.” I guess some might call RLH a weed but I took a closer look at what was growing. Imagine my horror when I realized that with all that rain, weeds that looked remarkably LIKE RLH but were, in fact, flowerless weeds had taken over the bed. Although the leaves are similar, the stalk is very different. I yanked them all out, tossing them into the street to be run over by cars and trucks. Take THAT! I carefully uncovered what remained of my RLH but several of the new plants had been choked out. 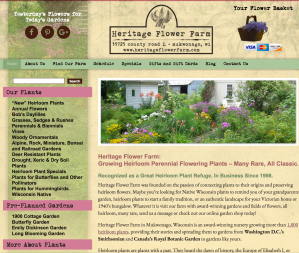 This is where dealing with someone as wonderful as Betty at Heritage Flower Farm pays off and brightens an otherwise cloudy day. I wrote to Betty asking if I could still get some RLH even though it’s now late in the season, and sent her pictures of the weed. She wrote back that she would send me some plants. I wrote again to ask if she needed me to send my credit card information. And she wrote back saying: “We’ll send you another one this week. We will cut back the leaves because it will help it recover from being dug after the record breaking heat we’ve had. Once they get going they are vigorous and weeds may grow near them but will not choke them out. … you’re not paying for this one.” That is kindness and generosity. I can’t WAIT for them to arrive and – trust me – I will guard them against the evil weed. This proves yet again that some of the best people I have ever met are people that I meet virtually. I’m not the only person who thinks Heritage Flower Farm is great – the National Wildlife Federation has honored them for their Certified Wildlife Habitat. So if you need flowers, or you want gardening tips and information, or you want some Rudbeckia Laciniata Hortensia for yourself, do yourself a huge favor and contact Betty Adelman and Heritage Flower Farm – Yesterday’s Flowers for Today’s Gardens.

3 thoughts on “The Best Flower”