It has now been a week since The Great Incarceration ended. It has taken this long to relay the information because we all needed time to adjust to the new life. Or is it the old life with new nuances? Whichever it is, the door stands OPEN.
. 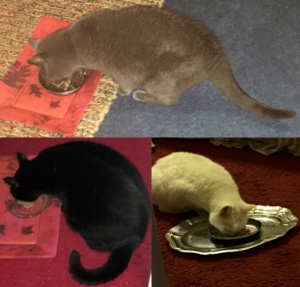 The first step was getting confirmation from the contractor that they would not be coming back anytime soon to do the radiators and that I could, indeed, “let the cats out” (that was the subject of an email I sent Don). Once we had the official “go ahead”, we planned carefully. We decided that we would feed them upstairs one last time on Friday night, and then LEAVE THE DOOR OPEN after cleaning up dinner. I got ready with my camera and sat on the stairs and called to BC.

BC never really hesitated, and that’s why my picture of her at the top of the stairs giving one last look back is blurred. The one of her coming around the hall corner to the stairs is a total blur. 🙂 I need Honour’s camera. BC took off down the stairs, looked back and meowed to say “aren’t you coming too?” and then headed for the living room. 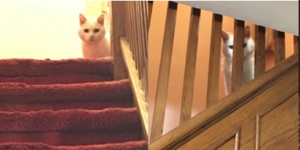 WC was a tad more cautious, per usual. I remained on the stairs and called her. She peeked around the corner. WC’s default reaction is “this is a trap” so I knew she would NOT come down the stairs if I was in her way. I moved down to the first floor and kept calling. She came halfway and rested. And thought. Thought some more. 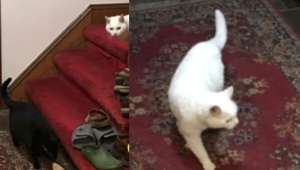 Then ventured all the way to the landing. BC insisted that it was NOT a trap! And there were LOTS of shoes (WC loves smelly shoes.) Finally she strode triumphantly across the (old) rug in the front hall – FREEDOM!

GC, well, GC REALLY like having everyone incarcerated on a single floor. She suffers from arthritis (don’t we all?) and she’s a bit lazy (the original couch potato cat) and she loved having everything she wanted and needed in one place. It took a lot of calling and coaxing to get GC to venture out the door and down the hall. I’d about given up on her when I saw her appear on the landing. I called to her and told her to come join the rest of us. She gave me a rather dubious look. I could see her consider the invitation.

Then she turned and headed back up the stairs very determinedly. A case of Stockholm syndrome? That’s probably not the correct syndrome but it will do. 🙂 She did eventually come back down later that night, after the rest of us had begun adjusting to the situation. 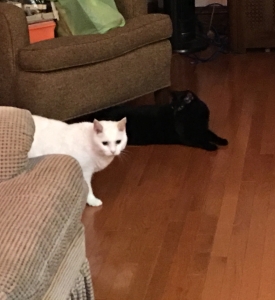 If I thought everything would go back to normal immediately, I was sadly mistaken. That night we left the door open. GC was in my face every time I rolled over, and began meowing insistently at 5:30 for breakfast. I pushed her away (yes, sorry B – I DID push her) and resolved to FIX this. That morning I tried to feed them in the breakfast room because that is now where all the cat food and paraphernalia is stored. Hah!! IT’S A TRAP!!!! WC has the others well trained. Sigh. I fed them in the kitchen. I did try for a few more days to win this battle – food in the breakfast room – but I have surrendered. For whatever reason, they do NOT want their wet food in the breakfast room. That’s fine for water dish and dry food, but WET FOOD IS IN THE KITCHEN. *rolls eyes* They won THAT battle, but I won the war.

After the first freedom breakfast, I noticed GC heading up the stairs with great purposefulness. I had a bad feeling about that.

Indeed, when I went up later I noticed she’d left a ‘deposit’ in the room where we’d had the litter boxes. Sigh. Had I not already resolved to ‘fix’ the early morning meowing, this would have cemented it. For the next 48 hours, we kept the upstairs hall door shut, this time locking the cats OUT of the 2nd floor. *grin* It only took the 48 hours to get life normalized: deposits left in the basement litter boxes. And of course, the occasional tummy deposit left somewhere on the first floor for me to find in my bare feet.

It was the best of times, it was the worst of times, but with any luck we will not have to repeat The (four month) Great Incarceration. BC and I are VERY happy being back together.