We had a guest at lunchtime yesterday. We’re not really sure who she (he?) is, nor from whence she came, but we were delighted to see her and have her share (so to speak) her meal with us.

We live in the suburbs. Houses all around us, sidewalks, paved roads, house lots averaging 50’x100′.

Yet living here we are surrounded by wildlife. We have opossums, raccoons, groundhogs and of course roving gangs of deer. (I fully expect one day to see a gang scene straight from ‘West Side Story’ between the herds.) In the last few years we’ve seen more and more crows. I’ve been told that the mountains to our north and west were the original rookery, but there has been so much development up there that they, like the deer, have been pushed out to us. I’m very familiar with turkey buzzards. I used to watch them from my office window. But I’ve never seen a falcon in the neighborhood before. 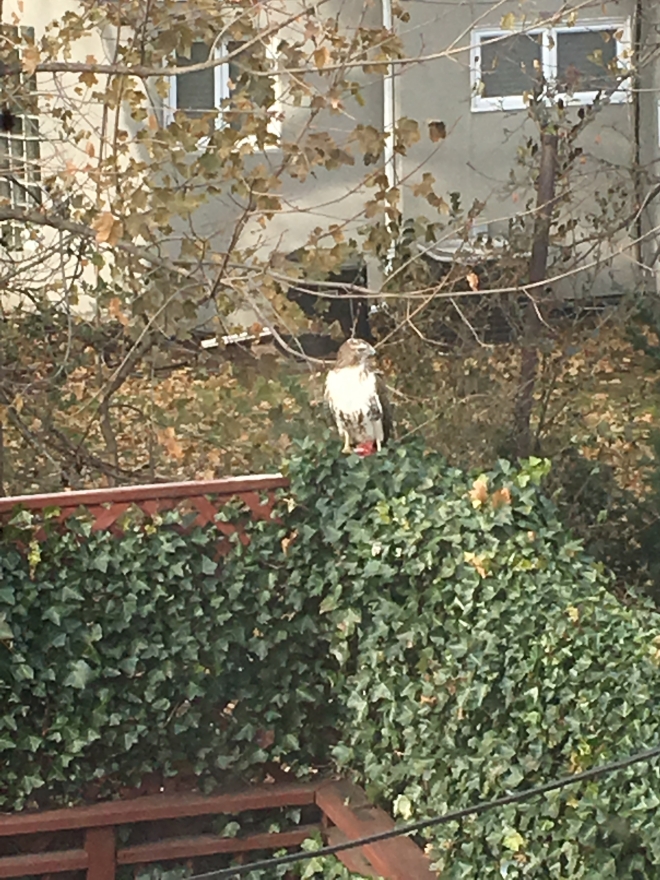 I was getting ready to heat up some soup when my husband began calling me urgently to come to him. I met him at the deck door and there she was – up on the privacy screen. She was gorgeous. I don’t know why I decided she was female – it might have been a male. Or maybe even transgender, I wouldn’t want to presume. But since I don’t know I’m going with female. I went to grab my phone to take pictures. We didn’t dare open the door so I had to aim around the grids in the door. I was sure she’d fly away any moment.

She continued dining, tearing at whatever tasty morsel she had up there. My husband is fairly certain it was a squirrel – he said he could see the fur. We went up to the 2nd floor and peered out from above. I stood on a chair so I could shoot over the screens. Drat my phone – I couldn’t not zoom in as much as I wanted. I kept clicking and clicking and clicking. She kept eating. I took a video. 🙂 She wasn’t going anywhere.

Finally I realized my pictures weren’t getting any better or any different than the 264 pictures I already had and I stopped. I watched her out the deck door for a bit and then I went back to getting tasks done. At one point I glimpsed a huge wing span and looked. She was gone. 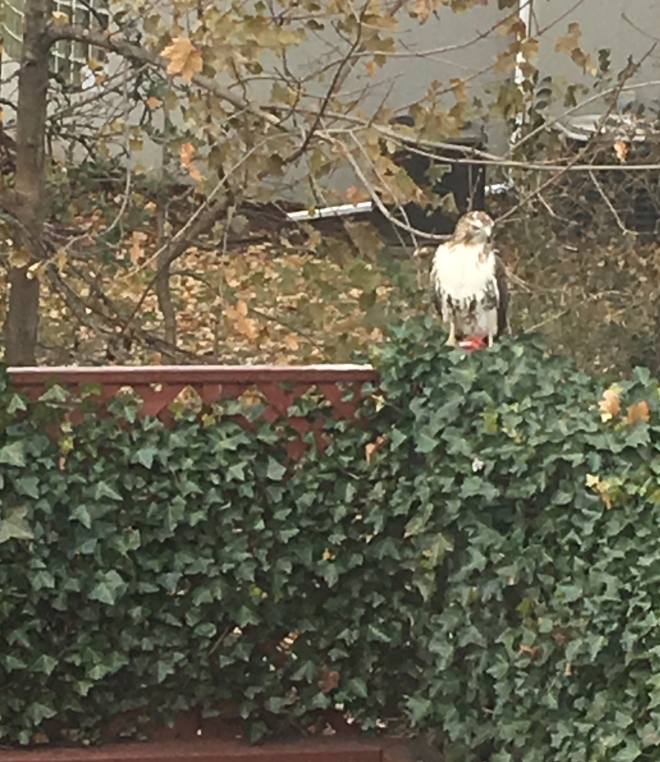 We have been trying to identify her. My husband says she was larger than a red tail hawk. She’s smaller than a turkey buzzard. She’s bigger than a falcon we saw in Orlando. (That’s a great story – the falcon looked a trifle injured. It was hiding UNDER a parked car, because there were 3 crows surrounding the car. I’m fairly certain that somewhere in my phone I have those pictures too.)

I thought, from the various pictures online, that she could have been a peregrine falcon. My husband thinks she’s a gyrfalcon.

After reading about their respective sizes I think he may be correct. If a peregrine is near to crow size, this bird was definitely bigger than a crow. We are both fairly certain that this bird could have taken our cats, it was that impressive.

Whatever she is, she was gorgeous, and we are so glad that we had the chance to meet her.

2 thoughts on “An Unexpected Visitor”