Is a quintessential way to get a slice of America. I have remarked often in the last 4 years that I was born to drive a convertible. 🙂 Four years ago is when my sister and I took possession of my mother’s red Solara convertible and I drive it every chance I get. Let me clarify – I drive it with the top-down every chance I get. Driving that car with the roof up is an unpleasant driving experience. You cannot see much out the back window at all – very poor sight lines, lots of blind spots. Living in NJ, therefore, the car is useful only from April through perhaps October, only when it’s not raining. And as we learned this past weekend, although it has a rear seat, sitting back there when the top is down is akin to being in a wind tunnel – you hear nothing and your face and hair are walloped by the wind. But I digress.

My sister and I headed to Haddonfield, NJ for their annual summer street festival. It’s a huge festival with lots of top-notch artists and crafters. Oh yes – there is also the hadrosaurus statue and museum if you are interested. But I digress yet again. 🙂 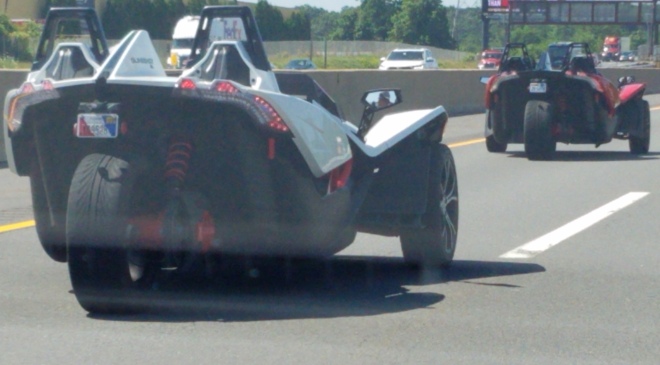 It’s a bit of a shlepp to get to Haddonfield for us. The fastest way is the turnpike. Of course we took the convertible and of course the top was down. At one point I noticed in the rear view mirror that there was a very odd car coming quickly in the left lane. I alerted my sister and we watched as this extremely bright flashy sporty car came up and passed us. As intriguing as it was from the front, the real surprise came from the rear – it had only one wheel! I told her there were more coming – get her camera and take pictures – these were so curious!! Unlike Honour and my son, my sister agrees to take photos from moving cars, difficult as it may be.

The 3-wheelers just kept coming. I thought there at least 20 in the ‘herd’ but my sister thinks there were more than that. They were moving very quickly and the road was fairly full so it was difficult for me to maintain the same speed as the cars passing me because there was too much traffic ahead of me. Hence the somewhat blurry ‘pack’ photos. Once home and on the computer, I did a search. It seems that we saw a herd of Polaris Slingshots. The colors were so bright, the herd was so unexpected, they just kept coming, it was a complete delight. Not at all like my rush-hour commute to HQ on the NJT, let me tell you! 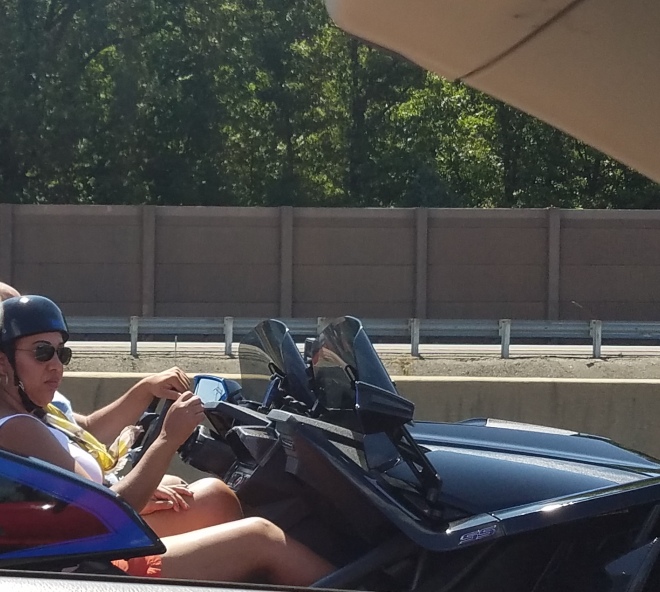 To top it off, once we could tear our eyes from the Slingshots, to our right was a car out of our past. Although it was a current car model, it was lime green and covered with hippie flower decals! Those flowers used to be everywhere. If your VW van or beetle was not covered with those flowers, you were obviously a member of the “over 30” crowd. 🙂 It was yet another sight that brought smiles to our faces as we headed to the fair. 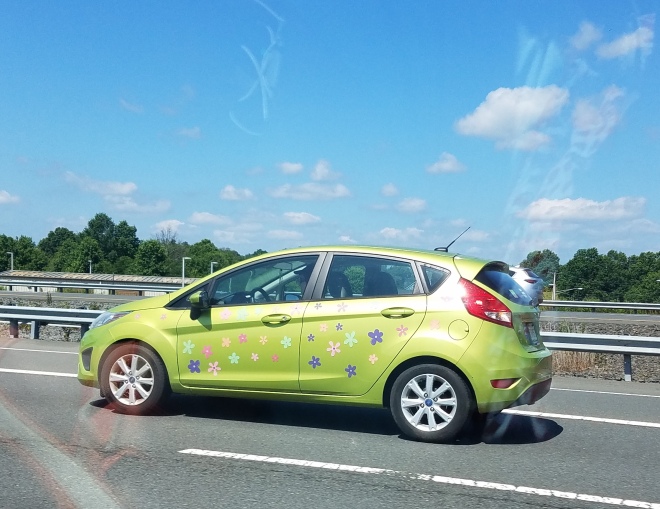