Many of the towns in our area have a day designated for the local farmers to bring the produce to town. After all, New Jersey IS The Garden State. I’ll tell you right now – I will put out NJ tomatoes against ANY tomatoes in the world – ours are the BEST. Our town has been doing this for several years now on Fridays. The hours have stayed the same, 11-5, but we now have the market from the first Friday in June through the last Friday in November (or maybe it is even the first Friday in December). The vendors have increased as well.

Besides the great farm produce (and it IS great – at least 5 different farms come in, including organic produce), we have bread, cheese, fish and a knife grinder. 🙂 I think it was last year when the food trucks began appearing. The smells are fantastic and make you buy even more because you get so hungry! Now there are specialty dog biscuits, clothes, vinegars, sometimes one of the NJ vineyards comes by, jams, nuts and spices. For several years there was a mushroom vendor as well, where I learned about many varieties I’d never seen before. And of course the pickle guy, with fantastic pickles (I like half sour) and pickled everything else. Sometimes there is even live music (a mixed blessing 🙂 ).

But perhaps the BEST part of the market is seeing all my friends and neighbors. I’d been at the doctor’s office (checking up on that pesky kidney stone) in the morning. I headed from there to the market. As I waited for some place to park the car, I chatted with my neighbor from down the block. When I headed to the stalls, I saw the doctor and her receptionist. I heard someone call my name and it was my friend from the other side of town (we’re due to have dinner together this week). Then *I* saw someone and called a name and my favorite veterinarian turned around. I have NEVER been to the market without encountering someone fun. I used to love to bring my dog up there too, because there are doggie water dishes put out by many of the stalls. We often end up with a stuffed bread (mozzarella, spinach, garlic) for dinner on a Friday. Or fresh cheese, bread and sun-warmed tomatoes. It is such a wonderful community event, and positive in so many ways. I think that it might have had a rocky start this year as we had so many wet Fridays (I was too wimpy to brave the rain – for all I know they may have done great 🙂 ) but the last few Fridays have been spectacular. It’s a wonderful way to end the work week – walking up to the market, seeing friends, and coming home with delicious goodies! 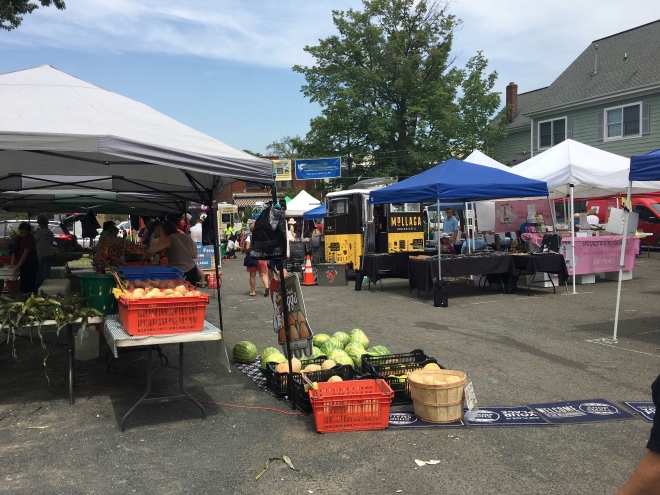