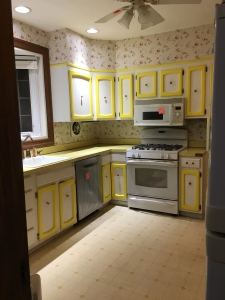 We are as ready as possible. The Great Incarceration has begun. 2 of the prisoners walked in of their own volition; one was betrayed in her belief that she was getting petted but seized and brought up the stairs and deposited behind the door.

We have moved everything moveable out of the kitchen and breakfast room. Items are tagged indicating if they are to be saved and stored in the garage or saved and stored in the dining room. The dining room is packed with items yet we expect to have both the refrigerator and my kitchen cabinet/table moved in there as well. I must have done a decent job packing items in clear boxes and organizing groups because my husband went looking for something on his own and found it. 🙂 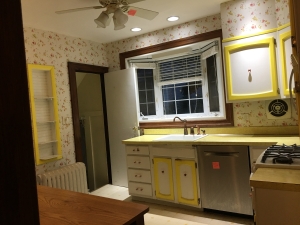 My basement is impassable with items that have been bagged and boxed for our congregation’s huge rummage sale in the summer.

The garage is reorganized to allow space for a dishwasher and table and 2 ceiling fans/lights and the microwave (rummage sale for most of that). The stove is being trashed. The doors are being trashed. I do feel a bit guilty about that but there is only so much I can deal with getting to the rummage sale. 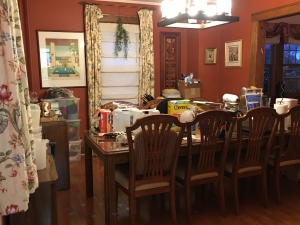 Of the 3 prisoners, BC is upset only when I leave her on her side of the door and go downstairs. BC has had her dinner, also munched on the dry food and I believe may have availed herself of the litter facilities. WC has been under the bed for hours. She emerges to meow loudly but if I talk to her or look at her she goes back under the bed. I don’t think she’s pleased. GC has emerged and joined BC and I in the food room (I incarcerated myself for awhile to read there, hoping it might prove that it was safe territory). She allowed herself to be petted, ate some dry food, but scorned her wet food twice. I’m not sure if that’s because she’s decided this flavor is not suitable for this location, or if it’s simply too stressful to eat under these circumstances. I’m willing to bet that come breakfast time tomorrow, GC will be able to eat.

The only troubling note in all of this is the lack of a phone call from my contractor. When I spoke with them on Wednesday we talked about Tuesday being demo-day, but Don would call me at the end of the week to confirm. Don has NOT called. It really makes no huge difference if demo-day happens Wednesday instead of tomorrow, but I am very ready for this to begin already. The sooner we start, the sooner it’s done.

I wonder if I’ll sleep tonight…..