I don’t do hardware. *grin* I barely do software, but I REALLY don’t do hardware. My family thinks I’m technical, but techies know I am clueless. So when things go “wrong” on my computer, I am as likely to blame gremlins as I am to figure out what is happening.

Friday I was invited to see a friend’s project. It required that I have streaming video. The video was not working on either of my computers. So we talked about it and I realized that I did not have Quicktime installed. I downloaded it to my gaming computer, installed it and yay! I could see the really cool project. I switched back to my work laptop and continued working in SL and OS there. (Hmmph. Trying to find a viable world in which to work on Friday was an adventure in itself.) Everything was fine. I really wasn’t on much during Saturday – spent the day in REAL sunshine in my REAL garden getting a REAL sunburn. 🙂 When I stopped inworld briefly Saturday night – everything seemed fine.

Sunday morning I was catching up on electronic matters. I thought – hmm, may as well put Quicktime on this machine also, in case I want to have video. Deed followed thought. Later in the day I logged into SL. I went to check on Frenis and the ducks. They had all turned black. I remember that a friend had had this issue with my ducks awhile ago – that I saw them as white and yellow, but she saw them as black. I thought maybe it was the computer. I’m going to make this short: I switched computers, I cleared cache, I logged in and out multiple times. Black ducks, black rooster, black clocks, black poseballs. I IM’d some friends to see if SL was being weird or if it was me. 🙂 Always a dangerous question. One friend came back and suggested that it was a texture issue with SL and maybe I could get my region restarted. I live on the mainland. I can’t restart my own sim. But that made me think. I tp’d to my office. I rezzed a new duck. Yellow. Went home, rezzed a duck. Black. Went back to my office, rezzed the duck, WORE it home. Tp’d in yellow, turned black. I had a friend rez in. SHE saw yellow and white ducks. She took a picture to prove it. 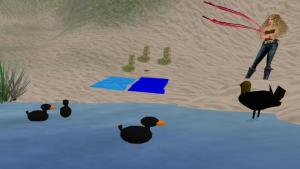 In the interest of trying to keep this shorter rather than longer… I started a chat with customer support. They restarted the region. When I tp’d in – I saw yellow and white ducks. Which then turned black. CS mentioned JIRAs and such. But being a dumb user I thought – WHAT has changed since my ducks were yellow and white? I added Quicktime. So I uninstalled Quicktime. Yellow and white ducks. Rooster, clocks and poseballs all returned to normal as well. I uninstalled Quicktime from both machines. No more black ducks.

Why????? I don’t understand this at all. Dale to the rescue! He suggested that while we were playing around with the HTML-via-media-URL stuff a few days ago, we may have set the media texture on my land to the default blank texture. He suggested that QuickTime was trying to play some non-existent media on the land for some reason and may have been replacing all of the blank-textured things with a blank black (lack of) video. So I reinstalled Quicktime this morning. Black ducks. I went to my media options. The default media texture had been changed to a black texture. ?????? Okay – *I* did NOT do that. I know I did not do that because I have been running parcel media tests and I have been passing my settings to other people for them to try my test routine. So Quicktime changed it. I changed it back to default media texture and bingo!!! Everything is back to normal.

*hugs* Dale!!! You are wonderful. Yet again you have restored my duckies to good health!