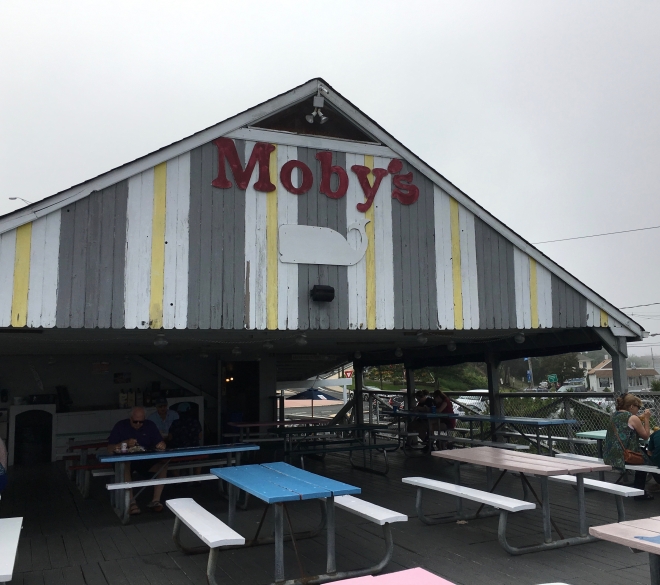 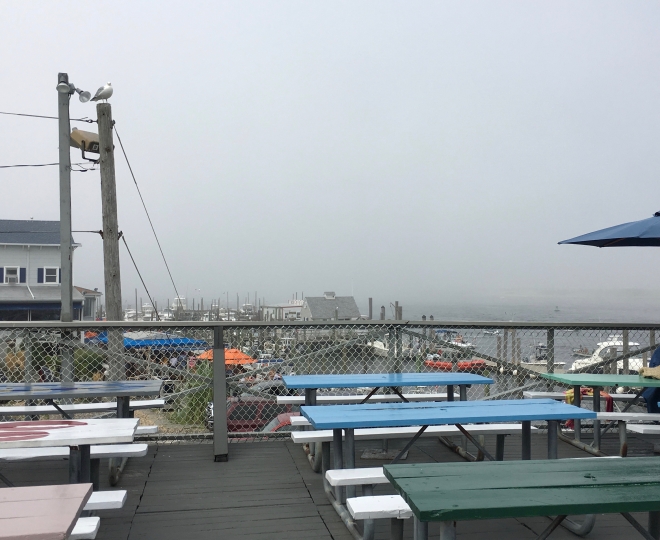 There are many places we like to go for dinner, but one of the most fun, most convenient and ultimately least expensive is Moby’s Lobster Deck. It’s owned and run by the same folks who run Bahr’s Landing restaurant (which has been there for over 100 years). We learned about Moby’s from friends of ours when our son was still in single-digits. As you can see from the pictures, it’s not much to look at. It really is a seafood shack. You go to the window and place your order and get a number. Then you go up on the deck and hangout and wait for your number to be called. I seem to remember that when we first started coming the picnic tables were covered with red and white checked plastic tablecloths, but I may have added that memory on my own. What I do know is a factual memory is that my son snitched a piece of fried food from his dad’s plate without asking. He’ll never do that again, because when he found out WHAT he ate, he was not a happy camper. *grin* I don’t remember it if had tentacles or suction cups, but my son did NOT want to be eating it. Some lessons are best learned first hand, pun intended. 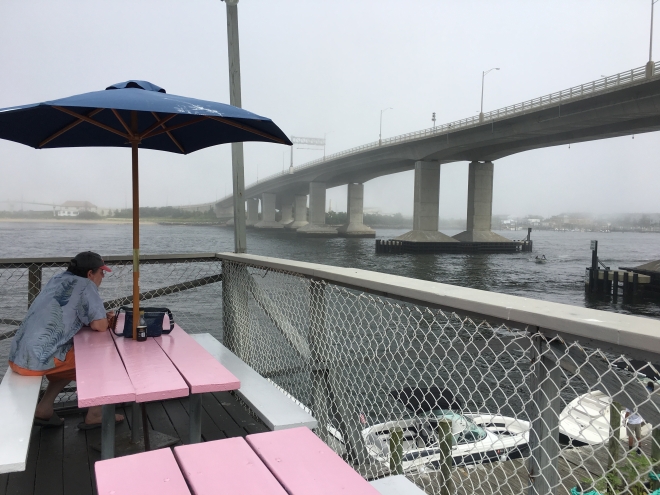 When we left the house it was hot and sunny. Of course we took the convertible with the top down. It’s the best way to go down the shore. 🙂 (It’s the best way to go most anywhere, as I think I’ve mentioned.) The weather was perfect and traffic was light, despite it being a Saturday. We were doing something a bit different than our usual down the shore trek for dinner. We left around 2:30 pm (we had a stop to make on the way). We figured we get there around 3:30 or so and have an early dinner, before the crowds started coming. I’d not had lunch yet so that timing was going to work for me. We took the local roads, not the highway, which led to an interesting observation by my husband. He noted that in one short stretch of road we’d passed FIVE pizza parlors. 🙂 We immediately began counting pizza parlors the rest of the trip. That led us to the all important question: Are there more Chinese restaurants or pizza parlors? I will tell you that we asked Siri, and she failed utterly. But I think we may have discovered the beginning of a new car travel game. 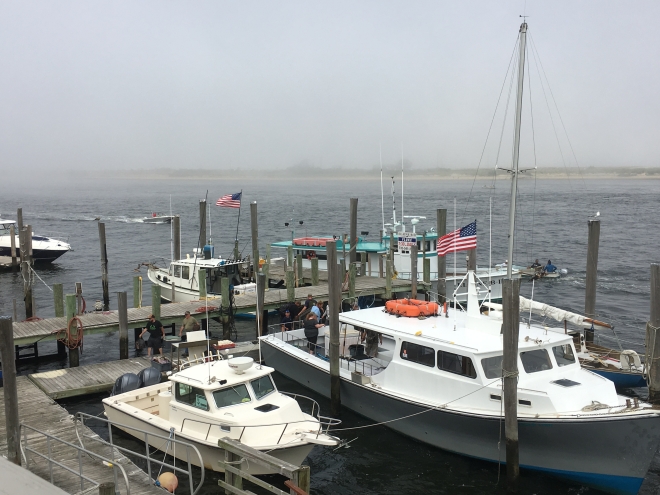 We were on the last stretch of road on the way to Highlands. There is one hill you climb, and then start down again to the coast. As we crested the hill I thought I was seeing smoke. My husband said no, that’s fog. Sure enough, as we came down the hill, it was fog. What a sea change from when we left! I have been down to Sandy Hook in the rain and the fog, so it was not a new view for me, but it was a bit uncommon. We do tend to go down the shore in nice weather, not fog. I actually enjoy a bit of fog in the mornings, or late afternoons when we are staying for a week. There is something so soothing and exotic about a touch of fog with the salt air, and the sound of the water. I will tell you that when there is NO fog, you would be seeing the sandy stretch of beach on the other side of the Shrewsbury river. 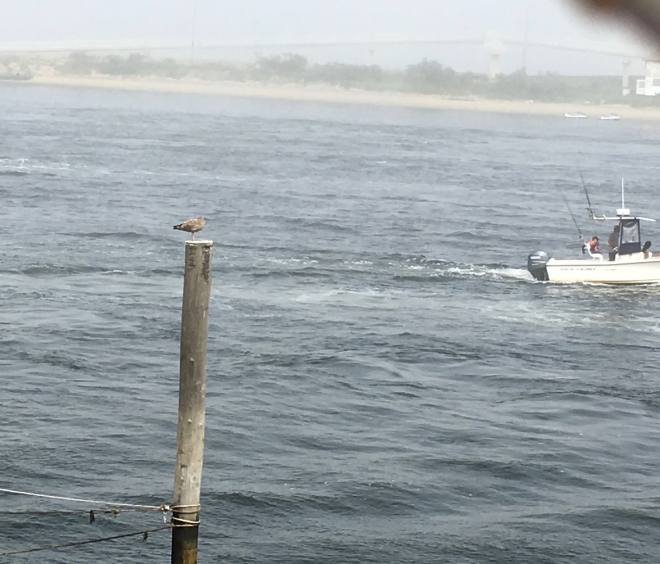 You can see by the pictures that we did indeed beat the crowd. We had a lovely dinner listening to the seagulls (wow, those are BIG birds) and the water lapping against the pier. My husband indulged with fried clams and steamers. I had a fried fish sandwich and corn on the cob. 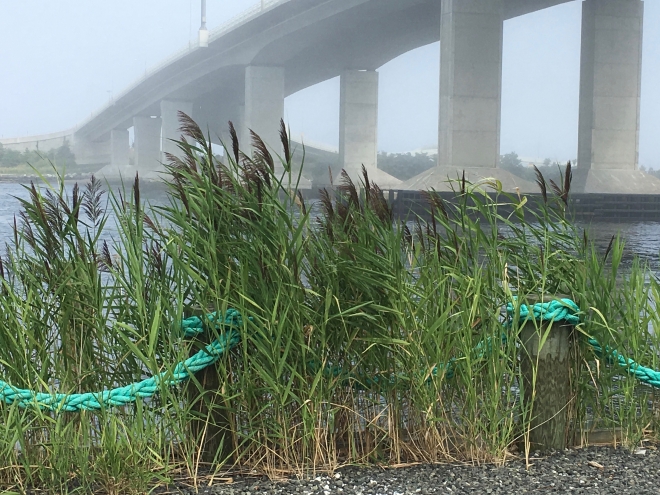 We had time after dinner to drive a little further to what used to be one of our favorite restaurants. It has changed ownership, name and menu. When I’d checked it out online the menu was not especially appealing – it wasn’t seafood oriented anymore. They still have the tiki bar and live music, but I’m not sure that will be enough to pull us back. There is another restaurant next door, that we have always observed, but never investigated. This time we found a place to park the car (parking is an issue in that area – not many spaces for out-of-towners. We wandered over and discovered that this place had a VERY interesting menu, as well as 3 different seating areas – the outdoor tables with umbrellas, an open-air covered area, and then the inside typical restaurant area. We decided we’d really like to try that restaurant next time. It’s going to take a bit of planning, however, because parking really is an issue down there. Too bad they don’t offer valet parking like our old favorite does. That was, I confess, a big lure for that place. We headed back to the car, and I cruised a few more blocks, scoping out where we might be able to park if/when we return. There did appear to be hope of spaces about 2 blocks away, so it’s certainly a stronger possibility now. *grin* All we need now is to find a time to get back there. 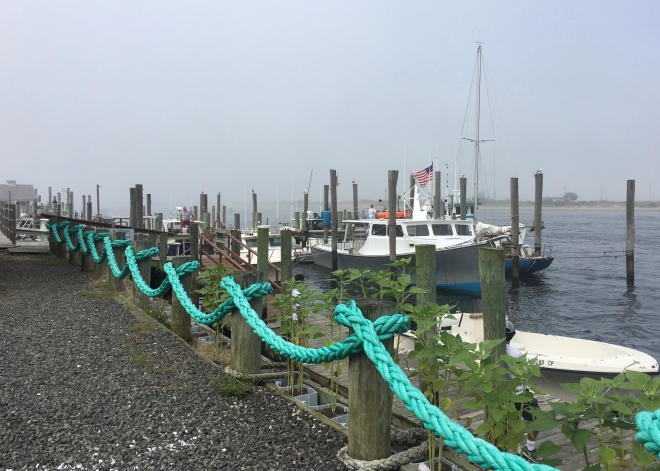