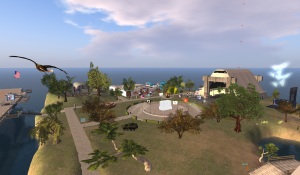 Sandy Whippet had a very good post the other day, listing sites in SL for observing Memorial Day. I knew I would not be able to get to those sites on the holiday itself so I headed over early to check it out Patriot Island with a friend. We landed in front of the Events Hanger and soon were greeted by Waya Snowpaw. Waya told us about the sim.

He explained that the sim had resources for veterans, active personnel and their families. Non-military folk can meet some of the vets and learn about what it is like to be in the military. They also provide peer support. There are representatives for DAV and Fearless Nation and Wounded Warrior. We had picked a good day to stop by because holiday celebration and memorial events were going to be starting in an hour. On Memorial Day itself there was going to be an old-fashioned cookout and dance.

Every month they hold a fund-raiser to help Wounded Warrior. For me, it does not matter your political persuasion – you must recognize that our military have taken on a job (just as most of us have) and that they do it well, to the best of their abilities. They do not set policy. So no matter your view, you can help support those who need help.

We wandered about looking at the memorials to departed friends, a rebuilt air-craft carrier, the various planes, and the recreation of the Tomb of the Unknown Soldier. There is a bald eagle soaring in flight about the sim. It is a beautiful build and extremely tasteful and respectful. 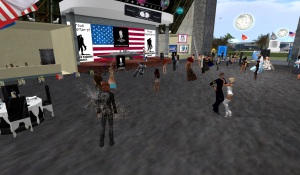 Later in the evening we tp’d back to hear Von Johin do a benefit concert for Wounded Warrior. Von was donating his time for the cause. When we left, they were only L$18,000 short of their goal of L$200,000. The music was great, the crowd was upbeat and the cause was good.

I hope you have a chance to visit and check out Patriot Island. It does give you time to pause and reflect, and honor those who gave their lives for something they felt was bigger than themselves.