Ahhhh – summer! Time of fresh berries straight from the farm! Most of you probably DON’T know that NJ is the Garden State. We have (or at least had) large and small farms all over the state. Everyone grows something edible in their garden. There is nothing as refreshing and wonderful as a fresh fruit salad made with blueberries, strawberries, nectarines, blackberries, raspberries and maybe a kiwi or two. Yum! When I put the berries into my cart somehow I can’t stop, and I find myself at checkout with LOTS of berries. As much as I like snacking on berries, even I can’t always keep up with the amount I’ve brought home. That means pies!

Way back in the fall I discovered the rustic apple cranberry tart recipe. What I loved about that recipe was the crust. It’s a galette – a one crust pie where the bottom crust is overly large and just folds around the filling, no need to cover the entire pie. I used that crust recipe and filled it with berries, using a Bon Appetit Berry Galette recipe for guidance on the filling. I like that crust recipe a lot. I’m not sure why but it always feels just a bit easier than my normal 2 crust recipe, maybe because I am working with less dough. I also made a pie one time with the leftover dough from the 2-crust recipe. I had to stretch that dough to make a rough lattice. I was in a hurry to have it ready for dinner so I didn’t weave the strips, but I assure you that it tasted just fine anyway! 🙂 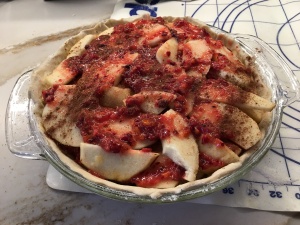 Or, Using up leftover pie crust and aging apples

Or, another way to put-off doing the taxes

It’s a gray rainy morning, we had to do that inane “spring forward” with the clocks last night so it’s already later than I feel, and my agenda for today includes preparing the tax information for the accountant and filing the remainder of the 2018 paperwork. What an awful start to a morning, right???? 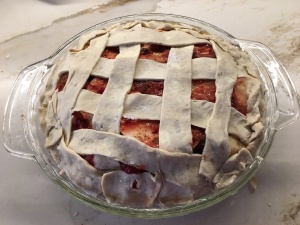 I made a quiche last weekend and my crust recipe makes 2 crusts. Quiche only needs one crust so all week I’ve been imaging ways to use up the remaining crust. Most of the ideas revolved around a veggie & egg pie but I never got around to doing that. In the meantime I had 4 aging apples that soon would be fit for nothing but the deer or compost. And I really don’t want to deal with my paperwork. What’s a poor girl to do? Make a pie!!!

I still had cranberries and sugar-free orange marmalade, both of which needed to be used or tossed soon. I pureed those with a tiny bit of Splenda brown sugar to help the mixture gel instead of run. I sliced up my apples, removing all the really aged areas. I layered the apples with the puree and sprinkled cinnamon and nutmeg on each layer. I didn’t have enough crust to make a top and bottom crust so I thought I’d lattice the top with however much crust remained after filling the pie plate. I probably could have squeeeeeeeezed out 2 crusts, but I didn’t realize that until I was playing with the lattice. And yes, this is probably the worst lattice you will ever see on a pie. 🙂 I figured once it was baked and we were enjoying the pie, we wouldn’t mind the appearance.

It smelled heavenly while it baked, and it looks darn good to me now that it’s out of the oven. It tastes yummy, too. 🙂

Which means it’s WAY too cold for me. Waking up to 17 F degrees makes working from home much more appealing than going out in the cold to go to the office. I miss them, but not as much as I love being warm and controlling the thermostat. It looks as if my crazy-busy work schedule has eased up now. We got the product out the door, working, and no major updates or changes have been requested. YAY TEAM!!!! Between the cold and the work I haven’t really had much to say. 🙂 I know, hard to believe, right? *grin*

It snowed Friday evening into Saturday. The good news is our next-door-14-year-old got up and began clearing all the walks (4 houses in a row). The other good news was that my husband said he’d do the vacuuming for me. Oh yes!!! I decided that if he was going to be helpful that I would do something nice for him as well. So I made a cheese quiche. I used 3 cheeses: mostly swiss and provolone but I tossed in a little colby jack for some more color. I thought it looked beautiful and it tasted totally yummy. The pie crust was wonderfully flaky.

I had a very odd experience baking crusts for the New Year’s Day brunch. I NEVER have problems with crust, and for that party 2 of the crusts were in complete crumbles. I ended up using much more water than I like, and for the big quiche basically glued the pieces of crust together in the pan. It wasn’t the flour, because one of them used gluten free flour and one was my basic all purpose flour. Someone suggested that it was the butter, but I used the same butter I always do. Perhaps they changed the recipe. For this winter quiche I used my go-to recipe from The Settlement Cookbook (page 323 – my book opens right to it).

I did play with the recipe a bit so I can’t verify if the butter was the culprit or not. I substituted coconut oil for the 1/4 cup of butter. I like the flavor the coconut oil adds and thought it would go well with the cheese and eggs.

I saw my young neighbor struggling to get my snow blower started in order to tackle the driveway. He wasn’t making progress and my husband was not home at that point. I said to not worry about clearing the whole driveway – just make 2 paths for the tires so that I could get the car out that evening without having to drive through the slush. He seemed quite relieved at that approach and set to work. I had to laugh, however, when I went out to see what he had done. *grin* Once he’d made me 2 beautiful tire paths, he’d done more than half the work – he should have just done it all. It was sunny, it was well above freezing, so I finished the job while the quiche baked.

I’m ready for spring and digging in the dirt.

There are many good things about posting about food and cooking. Even if people disagree about my recipes, my tastes, my process, the comments and reactions tend not to get personal or nasty. 🙂 If I’m thinking about food, I’m NOT thinking about other aspects of reality. On many days that is the REAL reason I write about food. I like creating things and cooking and baking are creative. My friend Honour talks about the difference between cooks and bakers, that one has more leeway and room for error than the other. I’m still not sure I’m convinced about that, but again, it doesn’t (usually) get personal when we discuss it. *grin*

Today I want to write about leftovers and collaborating and when cooks and bakers work together.

My husband does not bake – he cooks. Oh wow, he is SUCH a great creative cook. I love to bake and while I enjoy cooking now in my new kitchen, I’m nowhere near as innovative as he is. I’m getting better, but I’m not at his level by any means. I mentioned he brought home a store-cooked chicken the other night. That meant we had leftovers. We also had rainy cold weather all day Sunday, as well as other annoying reality. 🙂 I started thinking about cooking. I decided that a chicken pot pie would be perfect for dinner. I mentioned that to my husband and he agreed.

Now *I* was thinking more of the kind of pot pie I had growing up – basically a white creamy inside. I found a picture of one online to show you what I mean but we grew up on frozen pot pies, not home-made. It was something my father would make for us for dinner when my mother was at rehearsal.

As we don’t mix meat and dairy, we use coconut milk to get our “creaminess”. I also thought I’d take my leftover steamed vegetables and throw them in too – sort of a vegetable chicken pot pie. I’d already decided to use the coconut oil for that hint of flavor while making the pastry crust. I was browsing recipes online and thinking about concocting when my husband came down with a piece of paper and said “This is what I plan to make for the pie.”. *grin* Of course his recipe looked nothing like mine (his had curry and more asian flavors) and he had no intention of putting in the leftover vegetables, only the leftover chicken. I told him his concoction sounded great to me and I’d make him a crust.

That’s what we did. I made up my pie crust using margarine and coconut oil (remember, no dairy). It was a beautiful flaky crust. It’s interesting – I don’t think I’ve ever had a problem making pie crusts (except for 2 crusts for our New Year’s Day party, but that’s a different story) since I first began. I use the recipe in The Settlement Cookbook. 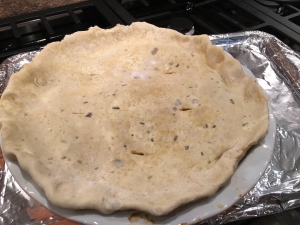 It says that the key to a good crust is very cold ingredients and as little water and handling as possible. That very morning as I listened to the radio talk show host, she was talking about making pies and bemoaning how difficult it is to make a good crust and how it took her so long to learn. I’ve just never had that particular problem and I know people love the pie crusts I make. Thank you Lizzie Black Kander and your fantastic cookbook (which is, as I’ve mentioned before, my #1 go-to cookbook).

The new kitchen gets another rave review here because while my husband was working on the stove, there was room for me to be rolling out the top crust. That NEVER would have been possible before the renovation. 🙂 I probably should have ‘over-ruled’ him about temperature and time (I’d have picked the higher temperature and the shorter time, which is more typical for pies) but dinner was delicious. Yay us!!