Okay – we got that out of the way. The movers showed up at 3 pm today. Well, A mover showed up, no truck, just Johnny. Delaney (?) showed up 90 minutes later with the truck. The truck was loaded and they were gone by 7:00 pm. Trust me on this – that is all you want and need to know.

There is a lot more detail to those 4 sentences but some stories are best left to the imagination. Go for it – make up your own details. We are leaving tomorrow morning at 7 am. This represents a compromise (see – and you all thought Honour and I could not negotiate and compromise). Honour agreed to wait until 7am to leave and I agreed to get my coffee at McDonald’s. We didn’t even need to pull in trained negotiators to achieve this harmony. Oh ye of little faith! We ARE going to make it to the Bay of Fundy together.

Let’s talk food. When last we left our heroine (um, that would be me, in case you were wondering.

This is MY blog, even if it is Honour’s trip. I get to be the heroine therefore.) she was heading in from the porch to have breakfast with the other B&B guests. They were a lovely family from Philadelphia area. *grin* A veritable invasion of east coasters!!!! The 4 of us sat down to an amazing breakfast feast prepared by Clair. First were the strawberry crepes, with the cream melting on the top, and the flower decorations from the plants right outside the window. They were fantastic and I thought that was a great breakfast. Silly me. That was the starter. Next came the eggs, with browned potatoes, plus asparagus wrapped in turkey bacon. (I want to note that Clair was aware of my dietary preferences and there was no dairy mixed with meat on that plate and it was turkey not pork.) Again – the arrangement was gorgeous and the food was delicious. The orange juice was served in the cutest container. I decided at the table that perhaps I should be a food blogger since I’m not a very good travel blogger. I CAN remember the names of food. 🙂

We sat and talked and relaxed around the table. 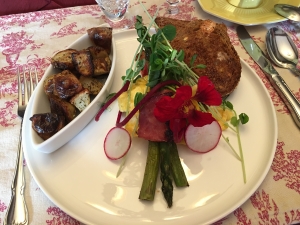 I got up finally to finish my post. The family was going to tour Vancouver. I checked in with Honour who was doing last minute packing (almost all of it was done already) and waiting/hoping for the movers to show. We agreed that friendship was best preserved if I was not waiting with her. (I have a running list of things that I don’t do – pump gas, pack. Please add “wait patiently” to that list.) Clair was able to serve as tour guide for me, however, so we decided to go to Vancouver so I could see the city.

Our first stop was at the bank, because I was getting concerned at my lack of Canadian cash.

I had run into more places that did not take my preferred credit card (the one that does NOT charge currency translation fees). Live and learn. The cheapest way to change money is to use your ATM card. It was so simple and the ATM was sooooo SMART!!! It asked me if I wanted US or Canadian currency, it showed me the exchange rate, the fee (which was miniscule) and the totals. It was great! These computer things may really catch on. 🙂 I immediately went into the pharmacy to buy a hair clip as I’d left mine home and convertible-living is easier with hair pulled back.

From there we headed into Vancouver proper.

I got a tour of the downtown, the court house, upscale shopping area, and other city sights. We stopped to meet Clair’s friend who owns a lovely jewelry store (and is a lovely, fun person too). My husband had suggested that I see if there were any waterway tours if I was staying over, so I did a search and found we were very near the harbour where there were indeed day boat trips. We made our way to Devonian Harbour Park to get tickets. We’d just missed a tour so we wandered a bit around the harbour until it was time to board. There was a movie crew having a lunch break in the park as well. We heard that there were a few movies being filmed in the city at them moment – Deadpool 2 being one of them.

We boarded the Constitution, a paddleboat with iron rail work. 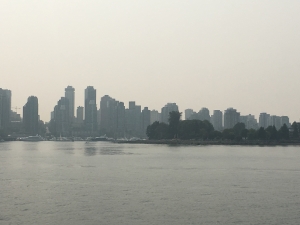 We cruised past Stanley Park, Lions’ Gate Bridge, the cruise ship terminals, the convention center, historic Gastown and other buildings and sights. The tour claimed that we’d see the “breathtaking North Shore Mountains” but there were no mountains. I’ll tell you – all of these Vancouver folk keep trying to tell me that there are mountains here. I think this is a scam they try to pull on all foreigners. You can’t hide mountains and I’m telling you – I have yet to see a mountain here. They can’t fool me – this whole mountain thing is an inside joke. 🙂

What we did see (and this was NOT mentioned in the tour brochure) were seals, bald eagles and cormorants. 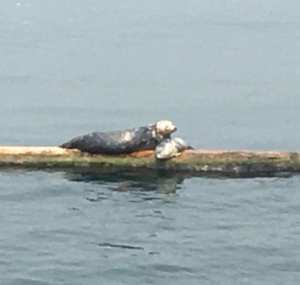 I took a zillion pictures of course, hoping that one of them might actually show a seal. I’m experiencing a lot of similarities with this trip and our trip to Maine. In Maine we must have taken 3 rolls of film of puffins in the water. When we developed that film we had a lot of photos of water, with some black dots in the water. 🙂 This is one of the best things about taking pics on the phone. You can see immediately if there is actually anything in the photo or not, you don’t have to wait for the film to be developed.

We disembarked from the boat and were discussing what to do next (a cold drink sounded great as we’d been out in the sun and we were a bit dehydrated).

My phone pinged and it was Honour, letting me know that Johnny had arrived (see first paragraph). We decided to head back home. It took an hour to get back as we yet again sat in traffic in the city and approaching the tunnel. I’m starting to feel like an old hand at getting about – I think I’ve gone through that tunnel every day I’ve been here.

Honour and I decided that I’d wait for her at the B&B, and we’d go to dinner once the movers left. 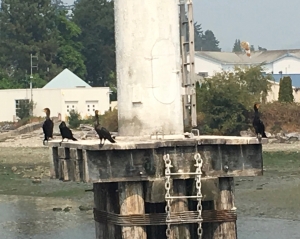 We make such wonderful plans. It’s really a shame others don’t buy in to our schedules. 🙂 I sat in the side garden with Clair and friends for awhile, having something cold to drink. It was lovely there, looking at the plants and enjoying the discussion. We’d never had lunch so Clair brought out a nosh for us. Thank goodness, because when I saw the food I realized how hungry I was and, as it turned out, Honour and I did not head out to dinner until shortly after 8.

Honour has spent the week saying goodbye to favorite spots.

One of these is a restaurant called the White Spot. This was a childhood favorite of hers so we headed there for her final BC meal. We were in luck!!!! It was Pirate Pak Day. This is the one day of the year when GROWNUPS (anyone over 10 years of age) can get their food in a pirate boat. Correction – not “can get”. Will get. Somehow despite Honour pointing this out to me AND my reading the little sign, none of it registered (because I have totally lost track of the days and I didn’t realize that today WAS August 9). When our meals came they were indeed in a pirate boat. 🙂 I have truly experienced all that British Columbia has to offer and it is with a light heart and full memories that I will set out tomorrow for Alberta!

Shenlei did it again! Another fantastic party! If I thought I was overwhelmed by fun, music, lights and friends at the Universal Rave, I had no clue. LOL. I spent hours being bombarded by burning skull & crossbones, sparkles, canons, diving orcas, music and friends. Fantastic! In the picture above you can see our lovely hostess, lower left. You can see one of the TWO pirate galleys. You can see the dance ball – black w/ pink skull & cross bones. You can see the blue Dance! sign. You can see wenches and PIRATES!!! I think everyone had a Pirate hat. There were swords and pistols and boots and eye patches. Bottles of rum and yo ho ho! The chat was filled with Yarrrr! and Ahoy! and Avast! and Matey! Everyone partied so no one was forced to walk the plank. 🙂 You can see we are all having a wonderful wonderful time! Thanks Shen!!! Can’t wait for the next one!! (Oh yes everyone – Shenlei has promised another Rave coming soon!)

Arrrrrr! This IS an international holiday! Talk Like a Pirate Day! You can 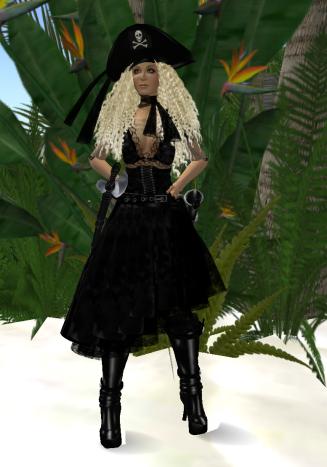 find it in Wikipedia! You can find it in the news!

But best of all – party with your friends!! I know where I’m going tonight!!! Shengri La’s Piratical Rave! Darcey and I went shopping last night and we are all set!!! Swords and Pistols! Pirate hats! We are sailing the high seas and looking for plunder! But we’ll settle for dancing and having a great time with friends!

Hope to see you all! Or ye’ll be walking the plank! 🙂 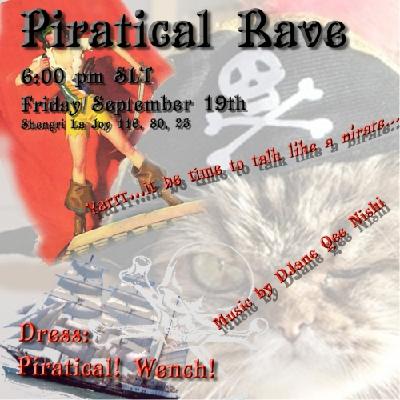 While many people who read my blog will already know these important things, there are a few who may not.  So here you go:

From Shenlei Flasheart:   “… my company, the Fashion Research Institute, Inc., has developed the Shengri La Vintage Marketplace on Shengri La .  We will provide vendor space for 20 emerging avatar apparel designers on our Second Life Shengri La sim for six months free of charge.  The designers are encouraged to build their brands, to sell their products through both their vendor prims and through the use of our catwalk system, and to grow their business. We are pleased to announce Michele Hyacinth as Curator of the Shengri La Vintage Marketplace for emerging avatar apparel designers in Second Life. Michele is responsible for managing the design selection process and overseeing the marketplace. For more information and details about the program, please contact Michele.

And check out Chestnut’s blog for more fun happenings at ShengriLa this week: