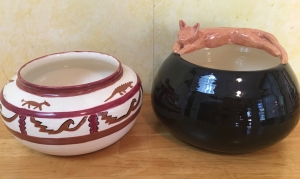 Are you creative? Are you artistic? Do you have an eye for balancing an image? My friend, the Fundy Migrant, 🙂 is taking a course on photography. I’ve always thought she took great pictures but I do see her skill growing rapidly. I think that supports the credo “Practice Makes Perfect”. Or at least leads to improvement. Those of you who only know her as the Fundy Migrant or “that woman” don’t know of her long history of creativity, but you will learn. My personal favorite, of course, were the Drama Dolls. And my very own special Drama Doll. But I digress (as usual). Because this post isn’t about her but about me (as usual). *grin*

I am very conflicted when I think about my artistic abilities. On the one hand, I think I’m creative. I’ve made and sold my own pottery (for real money to people who didn’t know me). 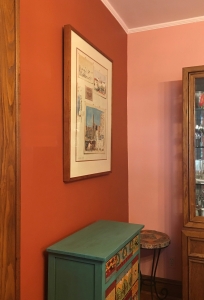 I think I have a good eye for my gardens. I learned to make virtual trees (thank you Fundy Migrant) and I learned to script so items I created would move. I made virtual hair which people wanted. I bake well also – ask my brother-in-law about my sugar free rugelach. On the other hand, I was NOT considered the artistic member of my family. Museums exhaust me mentally long before physical fatigue sets in. I passed up visiting Florence to go back to spend more time in Rome. You might remember a posting about a picture in our family home – the picture that my mother declared separated those with an artistic eye from those without. I loathed that picture. So you know where I was slotted on the spectrum. 🙂

I have been very slow to renovate my house. The house is nearly 100 years old. We’ve been there 34 years. We still have the original kitchen cabinets, kitchen counter, upstairs carpeting, and upstairs bathroom. For most people of my acquaintance, this is little short of heresy. Almost taboo. We did an addition to the house. We repainted the kitchen and changed the lights, and we’ve done other repairs and such over the years. 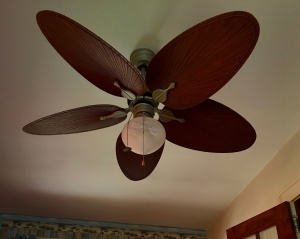 But other than the addition, which we did nearly 30 years ago, I’ve not done anything BIG. Several years ago it was time to repaint the living room and dining room and my big-breakout designer action was to paint the walls something other than WHITE. I used TWO strong colors in the dining room, and the ceiling in the dining room was the same faint pink-overtones of white that were the walls in the living room. I loved it. I remember my mother making “a face” at the end result. I, however, felt vindicated and still love my palette to this day.

Last year about this time we needed a new chandelier for the dining room. While we were at the lighting store, I saw a ceiling fan that captured my heart. It had 5 blades, shaped like fat rubber tree leaves. We bought it and replaced the ceiling fan in the sunroom. I thought no more about it until my niece suggested that I make the sunroom my “beach getaway” room, my own little tropics in NJ. I’d never considered redoing an entire room with a theme. I know OTHER people do these things, but I never considered it. But the suggestion took root, especially when my niece gave me the color palette she thought I’d like. I redid the entire room, piece by piece, idea by idea, slowly but surely. Everything was done except…. except…. I wanted a big seascape above the windows across from my reading chair.

I didn’t find what I wanted at craft shows or online. I found wallpaper, however, that triggered some ideas. The wall is mostly windows. I wanted something more “ocean, beach” for the little bit of wall that remained. I bought wallpaper that looked like a weathered ocean fence, and a border that was ocean waves, sand dunes with beach grass and blue sky. I told folks that I was going to put the fencing down the wall and across the top of the wall above the windows, then put the border on top of that so it would look like I was looking out over the fence to the ocean. The reactions I received ranged from a slightly skeptical look to “that’s ridiculous, the ocean isn’t ABOVE the windows”. It looks great. I love it. It’s everything I wanted. People who see it love it too (okay, they might be humoring me but I don’t care. *I* LOVE it.)

I’m feeling much more confident about my ability to design a room and pull the various pieces together. I have much more faith in my taste in furnishings and color and concept. That is a very good thing, too. Because in 2 weeks we will gut our entire kitchen, widen a doorway, and redo the kitchen we have had for 34 years. Big changes are coming….