I would never let my cats get on social media. I KNOW them. WC would complain. GC would ask for food. BC – BC isn’t interested in anything but sitting on my lap these days. I don’t know why she’s become so needy. I guess because it’s really really hot out and she wants me to know that she is not just a winter blanket. In any case, I have enough cat chores to do without adding computer responsibilities to my list. I do, however, follow cats who ARE on social media.

I keep up with Larry, the 10 Downing Street cat. I follow the adventures of Ashton, Cupcake, Newton and Pierre. I’m not biased – I follow the Bronx Zoo Cobra as well.

This morning I was “introduced” to a new cat – Sockamillion. I don’t know Sockamillion well, and a quick perusal of his (somehow he seems male to me, but I could be wrong) tweets did seem to indicate a lot in common with my girls (all about him *grin*). He (she?) is MUCH more creative however, as evidenced by this morning’s post. 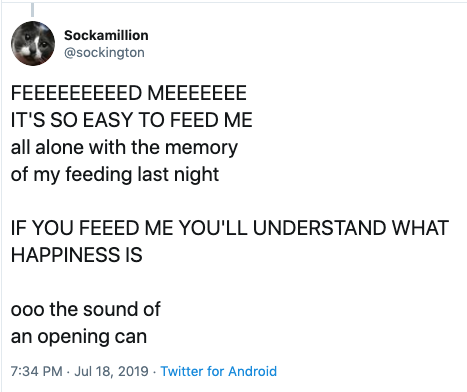