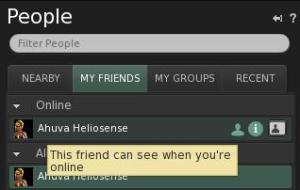 Update: This issue continued to rankle, especially after my friend and I exchanged screen shots showing that he did indeed have me clicked and I could not, in fact, see him in my friends list. I turned to my good friend Zha Ewry, not only one of the smartest people I know but one of the most determined. She and I clicked and unclicked, logged in, logged out and clicked some more. We managed to confuse v2.6 until it was assuring her that I could NOT see her logged in while it was informing me that she was indeed logged in. And the flip side too: she was telling me she was there and I couldn’t see her. So it is indeed SL that lies. Apparently v2 is NOT propagating the changes as quickly or as accurately as it should. Here is the word of warning to you: If you are a person who periodically unclicks people – SL may NOT be doing what you think. They may see you when you think you can work in undisturbed bliss and they may not see you when you think they can, and you wonder why they no longer greet you when you login.

Unclicked. What a concept. It controls the permissions you give your friends. Friends can or cannot see when you are logged in, map where you are in world, access your rezzed inventory. If you have clicked those columns next to that friend’s name, they have that permission. I think that the default is that all perms are unclicked except the one that says “see when you are logged in” – that defaults to clicked –> permitted.

I tried unclicking twice. The first time I was less than 6 months old and discovered someone had unclicked me. I don’t know WHY. She SHOULD have just unfriended me, given the depth of her emotion, I suppose. I didn’t even REALIZE that she’d unclicked me until we were standing near each other someplace and I thought – that’s odd, I don’t see her as being online. And so I learned about “unclick”. I unclicked HER for a few days and then thought – this is so stupid. *I* don’t care if she knows if *I* am logged on or not. *I* am not mad at her. This is childish. So I clicked her.

The second and last time was a year ago. A friend and I were having a disagreement. I did not want to discuss it any more at the moment. I suspected we’d both be inworld and I suspected that he’d want to continue it and I wanted to forget it for a bit and simply have fun inworld. So I unclicked him for the evening, fully intending to reclick in the next day or so. More fool me. I saw him logon. And then he IM’d me. “SL says that you are logged in” he typed. Sigh. So much for THAT strategy. Obviously he had his own method of checking logged on/off without relying on the friends list. He was a good friend so I clicked and we continued the discussion and ultimately resolved it.

You want my opinion? Even if you don’t here it is. Unclicking is stupid, childish, and pointless. We all have a variety of ways to verify that someone is on or off without looking at the friends list. Remember the big brouhaha last year when Emerald viewer showed you overtly which of your friends had unclicked you? Remember how enraged and wounded unclicked people were?

Either you are mature enough, reasonable enough, well-balanced enough to respond to an unwanted IM by saying “I’m sorry, I am not able to chat now” or you have no business being in SL. If indeed you ARE working, you could change your status. If you are working and need to be able to take IMs, we’re back to the “sorry- I can’t chat now”. In my opinion SL is for socialized civilized beings. Grow up. If it matters to me, I can find out if you are logged on. You want to unclick me? Fine. I find I no longer have very much I care to say to you.