Yes, I am biased. Yes, I use my blog for my own personal interests. So having stated that openly and upfront, let me tell you about a vote I think you should cast.

Honour McMillan has been nominated for SL Entrepreneur of the Year, a recognition bestowed by SL Entrepreneur Magazine, an electronic publication dedicated to business in SL. There are 12 nominees including Honour. While I am sure that they are all deserving of recognition, I believe that Honour deserves this award. And that’s how *I* voted. Aintree Nursery has been a source of textures and plants for me for over a year now, including rescues from under a bus. *grin* Honour was nominated for her Drama Dolls and Doll Cozies.

The Drama Dolls, should you not know of them, are a riot. They are intended to help you relieve the stress and frustration of having encountered someone who dissed you or done you wrong. Drama dolls come in a variety of dress, culture, gender and occupation. Doll Cozies are for hugs and love and comfort. I had the great privilege of watching the birth of the concept, the nurturing of the creation and the ultimate production of the dolls. While the Cozies are cuddly and sweet, it is the Drama Dolls that absolutely win my soul.

Although there are many, many varieties of Drama Dolls, none of them were quite right for me in the recent past. I was a bit frustrated, stymied at something I was attempting. Yeah, I basically “blamed” one person for the bulk of my aggravation. Hey – it couldn’t have been MY issue, could it???? Of course not. *smile* Poor Honour. She had to listen to me gripe and whine and spew and complain. Finally one day, when I was close to tears, my very own customized DD appeared. Now, I won’t tell you what name I gave my doll, nor will I repeat the dialogue. *grin* Honour pegged this person so completely that to me it seems glaringly obvious who it was. But the fact of the matter is that I really was truly angry when I started up the DD HUD. By the time my DD self-destructed, rising up to the heavens with a repentant, beneficent smile under its halo, I was laughing out loud hysterically, screaming at each phrase the doll uttered. Now THAT is a great product – turning anger and frustration into good humor. 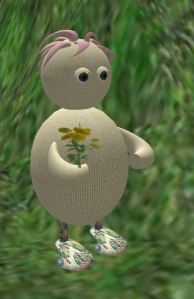 I love my Cozies as well, but when I need a smile, I dig out the chat from that DD and read. *grin* Ah yeah, that is so good. Honour for SL Entrepreneur of the Year! Go and vote.